Seahenge to get permanent display 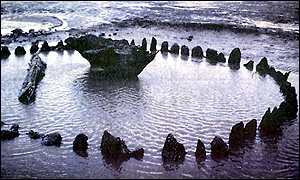 A timber circle dating back 4,000 years which was found in the sea off the Norfolk coast then years ago is to be put on permanent display in King’s Lynn. Seahenge, as it is known, has 55 oak posts around a central upturned stump dating from the Bronze Age. It was found emerging from a beach at Holme-next-the-Sea.

Timbers were studied at the Bronze Age Centre, Peterborough, then preserved at the Mary Rose Trust, Portsmouth. After it was excavated, 3D laser scanning revealed the earliest metal tool marks on wood ever discovered in Britain. Archaeologists at the Bronze Age Centre, believe between 50 and 80 people may have helped build the circle, possibly to mark the death of an important individual.

Seahenge became exposed at low tides after the peat dune covering it was swept away by winter storms. The site's excavation was initially halted by protests by a group of about 12 Druids and environmental campaigners who said the sea had cared for the site for 4,000 years and would continue to do so. But researchers said the exposed wood was deteriorating fast. Funding from the Heritage Lottery Fund and Norfolk County Council has been provided for the Seahenge Gallery project at the Lynn Museum which will house the timber, displayed in its original formation. The central stump, which is still being treated, will join the gallery at a later date.

John Gretton, of Norfolk County Council, said: "The discovery of Seahenge in the summer of 1998 captured the imagination of the public and archaeologists alike. "Whilst the research done on the timbers has led to some historians drawing conclusions, the original function of Seahenge remains mysterious, and I hope that visitors will flock to the newly restored Lynn Museum to speculate on the ancient meaning behind the timbers - which we were able to rescue for all time from further damage."

What a fascinating find. I would love to see it in the museum. Or touch it.

I will have to go up to King's Lynn to see it. It'll be a long drive but worth it!

Wow that's impressive!!! Thanks for popping by :)

This is one of those things... part of me says "LEAVE IT ALONE and let nature and history take its course" and part of me says that it's best preserved as they are going to... Ach! Conflict!!!

I 'spose 'tis for the best in the long run to preserve the site.

Oh it certainly is Mrs Wibbs. I will ahve to go see it.

I'm for its preservation Doubledeckerbusguy.It truly is an important find

I did learn something knew here. Very exciting news in fact

Someone needs to tell these crazy Druids that the orginal Druids were not the builders of these circles.

It is a shame it had to be moved, but it is far better to move and preserve it than let it rot away!

Think it is a must see for me too.

Glad you found it interesting Tor

I know what you mean Crushed. I have no problem with mondern druids but they have no real connnection with such places

Glad you found it interesting James

I think it was for the best Cherie. King's Lynn here I come!

As a Guru I knew all about this place. One of my forebeares helped build it. Of course we always knew it would be flooded but we had hoped for a few more centuries.

I'm working my through all my blogroll to let you know that, due to the useless of both blogger and my server, the url http://www.freelanceguru.co.uk no longer works.
For some reason the only address that's working is http://Freelanceguru.co.uk

Ah well but at least it's still around! Thanks I'll update my blogroll

Fascinating, Jams! Including the final sub-clause: 'rescued for all time'? Ha ha.
Btw, at Omnium - the blogospheric outpost of Seanhenge :) - it has been a very wordy Wednesday.

Well maybe not for all time but hopefully longer than it would last if left to the sea!

There's some great reading there. I will be investigating, Sean!