Rioting in Romford... sort of

Early evening last night I saw a few rumours on Twitter and Facebook that Romford was set for distrubances. I kept an eye on Tweeets about Romford and after a while rumours abounded - Primark was burning, McDonalds and Costa Coffee had been smashed, even Romford station was ablaze!

I love quite close to Romfrod town centre. A quick check outside my back door confirmed that the sky was not glowing orange from anything other than light pollution and there was not much screeching of sirens.

In a moment of impetuousness I loaded my tatty Lowepro camera rucksack with my old Nikon D50 and a couple of lenses and headed towards the centre.

Victoria Road, the main location of fast food joints and Chinese and Indian restaurants was largely deserted, the eateries closer to the centre  being shut. The area outside the station was deserted except for  groups of police officers and a few people exiting a railway station that was clearly not in the slightest bit ablaze.

The South street bars and clubs from the Goose (once the Mawney Arms) to Yates's (formerly office accommodation if I remember rightly) ere all closed but it was clear that neither McDonalds nor the Costa coffee shop were smoking piles.

Moving further on into the pedestrian part of South street it was clear that Primark was  fully intact. However there were a number of youths milling around  further on so I decided to head home. Nothing to photograph.

The shop being atacked was Debenhams

This afternoon Romford was much quieter than one would expect even on a non-market day. By 2.30pm the banks were shut Other shops although the two branches of Greggs were already closed (a casus belli?)

In the daylight some minor damage could be seen: A pane broken at Debenhams 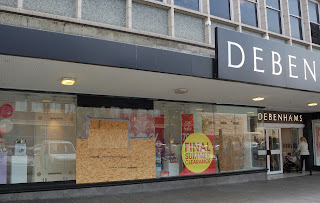 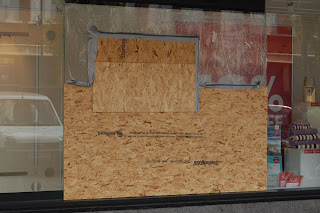 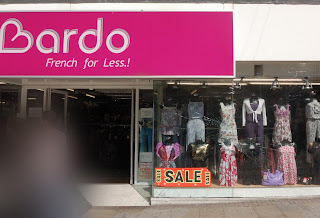 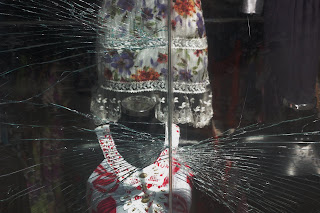 And finally some sort of attack on a chav couturier 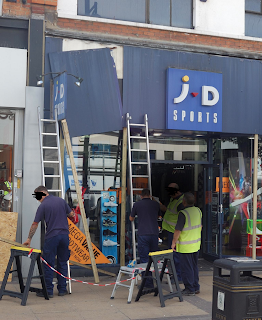 Amazingly last night the one place that was open (or at least had the lights on behind the solid doors) was the knocking shop on South street that masquerades as a sauna. Perhaps they were the ones to embody the Blitz spirit!


Ach the chocolate teapots that pretend to be our Prime Minister, Deputy PM, Home Secretary and Mayor of London have cut short their holidays. Far more police will be on the streets tonight. I wonder what will happen across the city tonight.
Posted by jams o donnell at 5:26 pm

So the answer is … get rid of the chav couturiers. Problem solved!

Hmm that is half of the retail economy fucked then Francis!

Mr C got sent home at lunch time from his office in Birmingham. As in go home immediately do not pass go. The shop underneath his office was an expected target today...

From what I can gather the police have managed to barricade Birmingham but this has meant the youths have gone to other local towns instead...

You're not frightened down there?

Jesus Cherie that;s not good. I hope it's over soon

Not really James. Nothing much is likely to go down here... the weekend may be a different matter though

I certainly will Nursie!

I wonder what will happen across the city tonight.

And across the country...

Be careful, Jams. Use the zoom rather than take a wild risk!

No fear of me getting too close Stan!

Chocolate teapots should never be left in charge of a nation. I really hope these riots stop SOON. NOw would be good.

Mercifully it is a lot quieter tonight Knat. I hope it stays that way