Obama gets a better species than Dubya 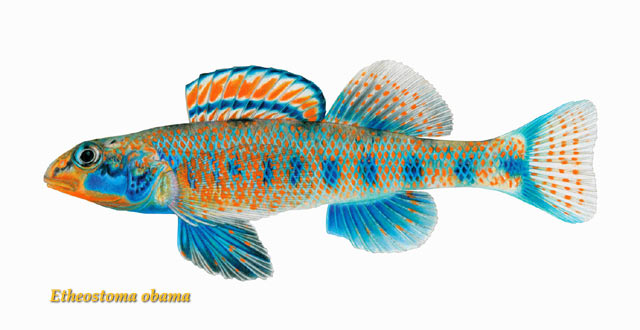 The Guardian (inter alia) reports that researchers have named a newly discovered species of freshwater fish after Barack Obama.

The researchers named the five newly discovered species of the darter – the smallest member of the perch family – after four presidents and one vice-president. All but one are Democrats, like Obama.
The darter, which packs a lot of colour into its fairly diminutive dimensions – males are mostly under 50mm in length – spends its life in the fast-moving freshwater rivers and creeks in America.

It gets it name from its ability to get around rocks and other obstacles on the bottom of waterways. Most darters live in the creeks of northern Alabama and eastern Tennessee, not typically hospitable terrain for Democrats.

The researchers, Steve Layman from Geosyntec Consultants in Georgia and Rick Mayden from Saint Louis University, came across the first new species in the Duck and Buffalo rivers of the Tennessee river drainage, according to Scientific American's Running Ponies blog.

Well it is an attractive fish and I know I would be pretty chuffed if I had a fish named atfer me. George W Bush was given the same homour in 2005 when he, Cheney and Rumsfeld all had new species named after him.

Cornell. University  back then reported that two former Cornell University entomologists who were tasked with naming 65 new species of slime-mold beetles named three of them after George W BushDick Cheney and Donald Rumsfled


The decision to name three slime-mold beetles after Bush, Cheney and Rumsfeld, however, didn't have anything to do with physical features, says Quentin Wheeler, a professor of entomology and of plant biology at Cornell for 24 years until last October, but to pay homage to the U.S. leaders. "We admire these leaders as fellow citizens who have the courage of their convictions and are willing to do the very difficult and unpopular work of living up to principles of freedom and democracy rather than accepting the expedient or popular," says Wheeler, who named the beetles

For anyone who may want to hunt down one of the new slime-mold beetles named for Bush, Cheney or Rumsfeld, Wheeler says that Agathidium bushi so far is known from southern Ohio, North Carolina and Virginia; Agathidium rumsfeldi is known from Oaxaca and Hidalgo in Mexico; and Agathidium cheneyi is known from Chiapas, Mexico.


Well there you have it.I thin I'd rather the fish than the beetle!

Dunno. One is slimy, the other is fishy. But that's how it goes with politicians.

And such an attractive fish!

Nicer than the beetle eh?

I feel sorry for both of them: fish and beetle. I would prefer to be ignored than to be thus baptised. Why do we feel that we have the right to inflict the names of underachievers to magnificent specimens of nature? It's pathetic!

Well it's still probably better than the flowers kimilsungia and kimjongilia