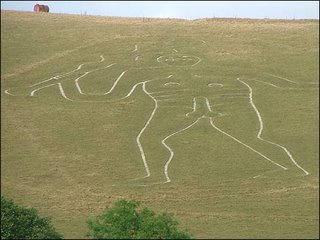 Just half a mile (about 800m) from the picturesque Dorset village of Cerne Abbas is Britain’s largest hill figure. Carved into chalk bedrock it is 180 feet (55m) high, and carries a club, which measures 120 feet (37m) in length. It is only one of two hill figures to represent a human form, the other being the Long Man of Wilmington in Sussex

Needless to say, the very size of its main attribute was put to good use in fertility folk magic. Local women who wanted to conceive would spend a night alone within the phallus, and young couples would make love on the giant to ensure conception. Sleeping on the giant was also thought to be a good way to ensure a future wedding for unmarried women. Just above the giant's head is an Iron Age earthwork known as the 'Frying Pan' or the 'Trendle'. This site was used for Mayday Maypole celebrations.

There are many theories about the age and the purpose of the Cerne Abbas Giant. It is believed that the figure represents Hercules. Some believe that it may have been created as part of a worship cult that started not long after the Roman invasion of Britain, others that it was created during the reign of the Emperor Commodus (180 – 193CE) who believed himself to be a reincarnation of Hercules. Another story suggests that it was created as a lampoon of an abbot of a nearby monastery who was expelled for malpractice. There is also a folk tradition that it is the representation of a Danish giant who had fallen asleep on the side of the hill. The villagers had cut off his head and then drawn around his body to show where he met his doom. It is said that the figure sometimes rises on dark nights, to quench his thirst in the local stream.

Unfortunately for those who believe the figure is of great antiquity its history cannot be traced back further than the late 17th century Mediaeval writers refer to the location as 'Trendle Hill' but make no mention of the giant. The earliest written reference to the Giant comes from 1694 where the Cerne Abbas churchwarden’s accounts show a payment of 3 shillings was made towards the re-cutting of the giant.

In 1751, John Hutchins wrote in his Guide to Dorset that the carving had only been done the previous century. Currently the most accepted (and the most entertaining) theory is that the Giant was made by servants of the local Lord of the Manor, Denzil Holles as a parody of Oliver Cromwell. There is a lot to commend this theory: Holles was a leading Parliamentary figure during the Civil War but he hated Cromwell with a passion (the feeling was mutual). Cromwell was also sometimes referred to as "England's Hercules" by his enemies.

I doubt that the origin of the giant will ever be determined absolutely but it amuses me to think that it may well be the biggest piece of graffiti in the world. I wonder if there ever was a slogan to accompany it like “Cromwell be ye bigge pricke” – if only!

What a fascinating figure. I really like your taking the time to lay out the history and interpretation. It is one of many things that makes your blog so interesting.

Thanks Fraser, much appreciated. Sadly the pic is a stock one from the internet. I do need to digitise some of my old photos.

More needed: I fell for him. Good post. Agreed, Fraser. Illiterate as I am, I don't comment it.

Thanks Red, I felt after doing mountain sized boobies I needed a big willy on the blog! I love the Cerne Abbas giant because it looks like it is a huge piece of graffiti.. Today's vandals paint on such a small canvas!

The Cerne Abbas isn't the only giant painting in Southern England. There are also giant horses in Westbury and Uffington. But Cerne Abbas is definitely the sexiest of them all. I am surprised puritan England allowed it to be preserved.

There are quite a few chalk fu=igures still in existence in southern England, but the Cerne Abbas is the most interesting to me (and the funniest!)

If the Denzil Holles origin is correct then perhaps that is why. Given his venerable past (he was one of 5 MPs Charles I entered parliament to arres in 1642) the and his land might well have been untouchable, even during the rule of the Major Generals later in the Commonwealth

I'm imagining a Puritan, or Victorian style history of such a masterpiece. Ranging from the fig leaves they crafted together in the beginning then evolving to a leather loincloth, and finally knitting a little pair of boxers for him.

LOL and perhaps in the not too distant future a mock leather posing pouch!

I'm saving my used dental floss to make him the finest G-string that side of the pond has ever seen.