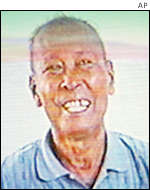 Today’s papers are carrying the story of the death of Ta Mok a former top leader of the Khmer Rouge. I doubt there will be a single person who will shed a tear for this butcher’s passing. It is the likes of Ta Mok that makes me wish Hell existed.

Ta Mok died yesterday at the age of 80 in a Phnom Penh military hospital . He was suffering from tuberculosis and high blood pressure and for a week he had flitted in and out of a coma. But he was a man who was intimately involved in the systematic massacre of somewhere between 1.5 and 2 million of his own people. This feeble old man was once Brother Number Four, part of the Khmer Rouge high command, and one of the architects of the Killing Fields.

Ta Mok was born in 1926, into a poor peasant family. His real name was Chhit Choeun. Ta Mok was a nom de guerre he later took for himself. His background meant that, unlike many of the other Khmer Rouge leaders, he did not have a foreign education, and was not considered an intellectual. He fought in the resistance in the Forties, first against French colonial rule and later against the Japanese. But in 1964 he was training to become a Buddhist monk when he fell in with the Khmer Rouge. The religious life was soon left far behind. By the end of the Sixties he was the Khmer Rouge's military commander.

When the Khmer Rouge finally seized power on 17 April 1975, they abolished schools, hospitals, factories, banking, money, religion and private property. They declared the Year Zero, the start of one of the most extraordinary and brutal attempts completely to reorder a society in modern history. In an attempt to create an agrarian communist Utopia, the Khmer Rouge attempted to abolish cities altogether. They ordered the people out of Phnomh Penh and Cambodia's other cities, telling them it was because of the threat of American bombing, and would only be for a few days. In fact, the Khmer Rouge had no intention of letting people back into the cities. They were forced to live in rural labour camps, working in the fields in 12-hour shifts without a break.
Anyone who stood in the way of this insane plan was executed. Even the most minor infringement of the rules could get you sent to the Killing Fields. And some groups were executed automatically: Christians, Muslims, Buddhist monks, whose number Ta Mok had once hoped to join, professionals and intellectuals. But they weren't simply dragged away to be killed. The Khmer Rouge's Cambodia was an Orwellian nightmare. They were sent for "re-education". In practice, it meant being sent for torture and probably execution. Crimes that could get you sent there included "memory sickness" - any degree of nostalgia for pre-Khmer Rouge times.
The Khmer Rouge tried to seal Cambodia off entirely from the outside world. But their horrific experiment in restructuring society lasted less than four years in the end. In December 1978, Vietnamese troops invaded Cambodia, capturing Phnomh Penh a month later and deposing the Khmer Rouge, whose leaders fled into the west of the country. In a strange postscript to their rule, the Khmer Rouge managed to cling on to dwindling pockets of Cambodia for the next two decades, fighting on as jungle guerrillas and trying to preserve their ideology.

Ta Mok remained a pivotal figure, controlling the northern part of the Khmer Rouge's territory. In the end, his determination to keep the Khmer Rouge's ideology alive was one of the factors blamed for its downfall, after he tried to lead a crackdown against a more capitalist lifestyle in its territory. In 1997, he named himself supreme commander of the Khmer Rouge, arrested Pol Pot and placed him under house arrest.. Pol Pot finally died in a jungle shack, reportedly of a heart attack. Ta Mok was finally captured in 1999 and brought to Phnomh Penh.

Several other high-profile Khmer Rouge leaders, including Brothers Number Two and Three, had given themselves up in return for a guarantee of immunity from the Cambodian Prime Minister, Hun Sen, who said Cambodia should bury the past. But the pardons have causing considerable discontent among ordinary Cambodians, so after years of delaying tactics, Mr Hun was prepared to send Ta Mok before the UN-backed tribunals next year. Some critics said that, with so many other leaders getting off the hook, Ta Mok was a scapegoat.

Now that is a trial that will never happen. The only senior Khmer Rouge leader who is now likely to stand trial is Kaing Khek Iev, also known by his nom de guerre "Duch", who was head of the S-21 torture centre. He is the only other senior leader in custody who has not been given immunity. He is 59 years old, which means Cambodians may yet get to see the trial of one of the men who carried out genocide on their own people.

No: he deserved hell here and now. No poetic justice done.

It always unnerves me to see pictures of genocidal maniacs grinning. Smiling Infidels?

Sadly we can't reanimate the evil bastard, Red. If so I would wish him a very long and very, very miserable incarceration

Not even an infidel, just an utterly evil man who presided over the death of so many Cambodians