Sorting out various junk in the back bedroom (not that a bed could fit in there anymore!), I came across my copy of Beryl Bainbridge’s novel Young Adolf. The book imagines in quite a humorous manner, a trip a youthful Adolf Hitler may have made to Liverpool before the outbreak of World War I.

The very idea may sound preposterous but it is not outside the bounds of feasibility: his half brother Alois lived in Toxteth with his wife Bridget and their young son William Patrick before WWI. Bridget herself claimed in her own memoirs, published posthumously in 1979, that Adolf did in fact spend around six months in Liverpool between 1912 and 1913.

Historians dismiss Bridget’s claims believing them to be a work of fantasy. Sadly there is no proof other than to put Hitler in Austria sleeping rough or living in doss houses and earning a living from menial labouring jobs. It would be amusing to think of Hitler becoming a scally rather than an evil dictator. Even if the story of Adolf the scouser is untrue, the story of Hitler’s nephew is quite interesting.

Hitler’s half-brother Alois was working as a waiter in Dublin, in 1909 when he met Bridget Dowling. In response to her parent’s opposition to their marriage, Bridget and Alois eloped and married in London in June 1910. The couple then moved to Liverpool, where Alois opened a restaurant. He subsequently bought a boarding house and a hotel before plunging into bankruptcy. A son William Patrick was born in 1911

In May 1914, Alois moved back to Germany, where he started a business making razors. Bridget refused to join him and the outbreak of war meant that she heard nothing of her husband until 1920, when she received a message he had died in the Ukraine. A year later, however, she learned that Alois was alive and bigamously married to a German woman. Alois, and Bridget officially separated but remained in contact thereafter

In 1933 William Patrick went to Berlin with the intention of benefiting from his connection to the new Chancellor. Hitler found him various jobs. Their relationship was uneasy, a situation not helped by William Patrick’s ambition. In 1938, he was asked by Hitler to relinquish his British nationality. If he became a German, said Hitler, he could play a significant role in the Reich. William Patrick the offer down. He apparently had seen enough of Hitler's intentions to know he wanted nothing more to do with it. On his return to England, Patrick immediately attacked Hitler. In January 1939, he wrote an article for Look magazine headlined "Why I hate my uncle". 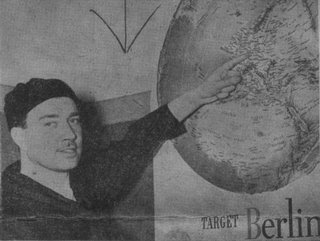 William Patrick Hitler in the US Navy
Realising that life in Britain with Hitler for a surname would not be easy, mother and son went to the US, where William Patrick went on a lecture tour to warn that his uncle had turned into a madman. In 1944, he enlisted in the US Navy serving for three years before being honourably discharged in 1947. (It is amusing to note that Hitler’s recruiting officer went by the name of Hess!)

After the war William and Bridget reinvented themselves. First they changed their name to Stewart–Houston (apparently after the anti Semitic writer Houston Stewart Chamberlain. He then married and moved to a Long Island where he and his family lived in anonymity William Patrick’s children are apparently aware of their origins and are said to have entered into a pact never to have children. In this way they intend to ensure that the Hitler bloodline dies with them.

the Last of the Hitlers

Daily Telegraph Getting to Know the Hitlers

I read this story recently in the paper, but I don't remember which one. They showed a picture of the house where I think, two of William's surviving sons live together. They keep a low profile and poo-pooed the childless pact speculation, but it does seem interesting that none of them procreated.

And all this while Alessandra Mussolini has been repeatedly elected to the Italian parliament, proudly carrying on her grandfather's legacy. And Il Duce isn't even her only famous relative. Her aunt is none other than Sophia Loren...

The Italians were always more family-oriented than the Germans...

I have seen the pact idea rubbished slsewhere too. On the other hand if they remain childless then the effect is the same!

Perhaps you are right Sonia! To be honest I would not want to shout my relation to Il Duce if I were Alessandra. But it does not seem to hurt her election prospects...

Adolf Hitler is a great interesting person, no doubt. If he had been able to harness his energy, he would have accomplish a great deal, in a good sense. Unfortunately, all his activities were cruel.