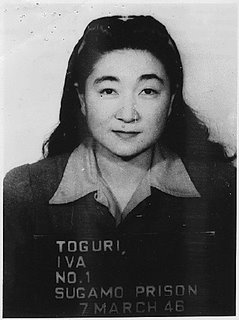 Many sources are carrying news of the death of Iva Toguri who after WWII was tried and convicted for broadcasting as “Tokyo Rose”. Although there is no doubt that Toguri made broadcasts on Japanese radio there never was a Tokyo Rose as such: It simply was a generic name given to describe around a dozen female presenters on Japanese Radio. Her broadcasts were never political and contained none of the venom spewed by Mildred Gillars (aka Axis Sally) a counterpart on German Radio.

This obituary comes from the Chicago Tribune.

Few who stopped in at J. Toguri Mercantile Co. on Belmont Avenue knew the story of the unassuming woman who moved quietly among the cluttered piles of Asian books and toiletries. Iva Toguri certainly didn't look like a war criminal, although the U.S. government convicted her as one following World War II. In the late 1940s, she was branded as being one of the voices of "Tokyo Rose," Japan's infamous radio siren to embattled U.S. troops, and served 6 years in a West Virginia prison.

Toguri lived with that stigma until 1977, when she received a presidential pardon following a flurry of media attention, including a series in the Chicago Tribune in which two of her chief accusers said their testimony had been coerced. A Chicago resident since 1956, Toguri, 90, died Tuesday, Sept. 26,

Toguri seldom spoke of her past and remained intensely private throughout her 50 years in Chicago. Customers at the store who knew who she was quickly learned that questions would go unanswered. "She didn't talk much about it," said Ross Harano, former president of the Chicago Chapter of the Japanese American Citizens League. "She was not a bitter person at all, she just put it aside."

Toguri was born on July 4, 1916, and grew up in California, where she received a degree in zoology from UCLA with designs on becoming a doctor. Those plans were waylaid by her ill-fated trip to Japan. Toguri was visiting a sick aunt in Japan when Pearl Harbor was bombed. He has since died. Stuck in the country, she was tossed out by her family because of her U.S. citizenship and harassed by the Japanese government. In 1943, she took a secretarial job at Radio Tokyo. The Japanese wanted a woman with an American accent for a radio show called "Zero Hour," and Toguri was enlisted

Toguri was one of about a dozen female broadcasters dubbed "Tokyo Rose" by American GIs. Toguri actually broadcast under the moniker "Orphan Ann" (Ann for announcer). While the Japanese were trying to use the broadcasts as propaganda, an Australian prisoner of war who wrote the shows Toguri did said the programs were intended as "straight-out entertainment”. Nonetheless, she was held for a year by U.S. occupying forces after the war, then released. But a public outcry fanned by influential radio broadcaster Walter Winchell led the U.S. to re-arrest her, said Wayne Collins, whose father defended Toguri at her 1949 trial in San Francisco.

Toguri was convicted of treason following a 12-week trial. The single count of which she was found guilty—seven others were thrown out—accused her of referring to U.S. sailors as "Orphans of the Pacific" and asking, "How will you get home now that your ships are sunk?"

Her innocence finally was proven in the 1970s through efforts by the media and her attorney. In 1976, two of her primary accusers told the Tribune's Far East correspondent, Ronald Yates, that FBI officials had forced them to give false testimony. His reports followed a February 1976 Tribune series by Linda Witt that brought Toguri's prosecution into question. TV's "60 Minutes" also did a segment on Toguri, said Collins, who had taken over his father's case and filed for a presidential pardon.

In January 1977, on his last day in office, President Gerald Ford pardoned Toguri. At the time, she said that she hoped to "go back to my simple life and work. The difference now is, however, that I have regained my American citizenship, a right and privilege I have always cherished."

Her father moved to Chicago after the war and started his import and retail business, which was initially on Clark Street. Toguri joined him after being released from prison and rarely talked about her ordeal.

In January, the World War II Veterans Committee presented Toguri with the Edward J. Herlihy citizen award, which is named after the World War II newsreels announcer. The committee had earlier printed Toguri's story in its newsletter, drawing an outpouring of support from veterans, said its president, James Roberts. "Not one said they were demoralized in any way by the broadcasts," Roberts said. "She remained loyal to the U.S., when many others may have turned on it, or given up." She accepted her medal during a quiet luncheon ceremony at Yoshi's, having declined an invitation to a larger gala three months earlier in Washington, D.C. "She was tearful and overcome with emotion," Roberts said. "As I understood it, it was part of a long process of vindication."

What a great movie, that story could make.

Toguri's story is well worth looking at. It is a pretty sorry tale and in her case she certainly didn't deserve her treatment back in the USA

Have you ever noticed all the legendary women with ROSE in their name? Down here we have the infamous, "Yellow Rose Of Texas" who supposedly seduced Santa Ana. Tokyo Rose, Yankee Rose, A Rose in Spanish Harlem, Ethel ROSEnbaum......


Anyway, I did find her story interesting. You know what really appealed to me? That she moved on with her life and didn't continuously rehash the drama. Sometimes I think all this modern day pop psychology about venting, and confronting those who hurt you, is just crap. Human beings are strong and really not all that easily traumatized.

I look at Iva ery differently to other collaborators. Had she not been caught in Japan then she would never have done what she did. There is no way she was any thing other than a partiotic americam. I will post links presetnly to some excerpts of her broadcasts.. then compare her to Lord Haw Haw or Axis Sally and not the difference.

I think she wanted to put it past her. She was pardoned and thus was able to get on with her life after a fashion. Many iwho have been through the sort of things she would have been through, or far worse, often want to leave the horror behind.

In light of recent events here in the U.S., I cannot help noticing that Toguri's conviction rested in part on coerced testimony. And now Mr. Bush intends to legalize its admission again in cases of his choosing... and based on the votes in the past couple of days, he will probably succeed in doing so.

Americans are not naturally enamored of torture or hostile to due process. But some among us seem to be easily persuaded to go against their natural sense of justice and humane behavior, and instead embrace cruelty, set up kangaroo courts and grant incredible powers to a man who would be king.

Thanks for writing about Toguri, jams. I always learn a lot when I visit your blog.

Thamks Steve, Iva's story has interested me for quite soome time. It is thanks to teh Internet though that one can find out more (even if it does generally mean having to filter out a lot of crap in the process). I had it in mind to write somethin more etensive bu t it will go into my pending pile!

I have no doubt that americans, like anyone else, will abhor torture and support due process. When thinking about , say Guantanamo, trying people by military tribunals is utterly counterproductive. If any of the inmates have a case to answer then it should be in an open court. We are the good guys after all!