The Wicker Man - Crash and Burn?

Both the Not-wife and I love a good (or a not so good) horror, especially a cheesy Hammer film like Countess Dracula (Please don’t look at this film for a the true biography of Elizabeth Bathory!), Deathline (If you have ever been on the Underground you would believe in cannibals too!) or Witchfinder General (the jolly japes of Essex boy Matthew Hopkins). 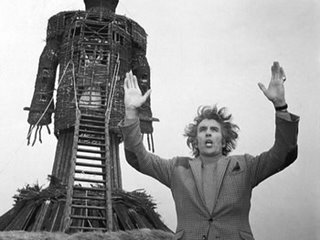 Christopher Lee as Lord Summerisle
One film stands head and shoulders above these offerings. I mean of course the Wicker Man which features star turns by Edward Woodward and Christopher Lee, plenty of nudity and a stunning soundtrack (If you are a folk aficionado that is)

Britt Ekland as Willow
Ultra conservative and deeply religious Police sergeant Howie (Woodward), sets out to investigate the disappearance of a young girl, Rowan Morrison, on the remote Scottish island of Summerisle. During his investigations he discovers that entire population follows a pagan religion under the island's owner Lord Summerisle (Lee) Needless to say Howie is increasingly shocked by the islanders' behaviour (although he is simultaneously attracted and repulsed by the alluring Willow (Britt Ekland). As the film unfolds he uncovers evidence indicating that Rowan may soon be the victim of a human sacrifice. In the hope of saving her he disguises himself as Punch and infiltrates the Island’s May Day festival. Little does he realise the fate that awaits him!

Sergeant Howie about to meet his awful fate
The Wicker Man had a troubled history. The film was massively cut before receiving a release as the support feature to Don’t Look Now. Despite its uneven and rather incoherent cut the Wicker Man eventually became a cult hit. In the late 90s an extended version was released that gave the film greater coherence. Sadly, the original cut no longer exists. Despite this it is an excellent film.

Hollywood is often unfairly criticised for the quality of its output (it is often fairly criticised too!). One of the biggest bug bears in my view is its fetish for remakes. Generally it manages to make a sow’s ear out of a silk purse – Get Carter, the Italian Job, Sommersby/the Return of Martin Guerre, the Ring/Ringu all spring to mind. Some remakes aren’t too bad: the Vanishing is well executed remake of Spoorloos except for its happy ending (It probably helped that George Sluizer directed both versions). 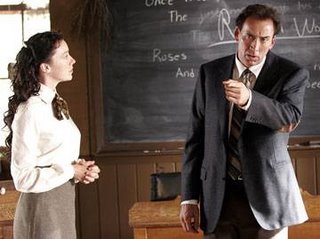 Nicholas Cage
I suppose it was inevitable that Hollywood would eventually get around to a remake of the Wicker Man: Edward Woodward has been replaced by Nicholas Cage, the Western isles have been transplanted to Puget Sound and Lord Summerisle becomes Ellen Burstyn as Sister Summersisle. Directed by NeilLaBute, the remake has just opened in the US to a hail of bad reviews.Writing in the Toronto Star, Peter Howell dubbed the film "an unholy mess" full of moments of "unintended hilarity”. Screen International critic Allan Hunter dismissed it as "a clunky, conventional mystery yarn that will appall aficionados of the Robin Hardy classic". Danny Minton of the Beaumont Sun went further, predicting that The Wicker Man will go down as one of the worst movies of the year. "This is the kind of film for which Golden Raspberries were made," he wrote. A private reviewer in the Washington Post said “A Wicker Chair is more interesting”.

Sister Summersisle
It is not all bad news: the Orlando Sentinel claimed that the film has some good ideas but never develops them. "It doesn't quite work out because LaBute or his studio lost its nerve and couldn't decide whether to play the film ironic, horrific or just a goof," Warner Bros has a lot riding on the success of The Wicker Man. The studio has been stung in recent months by the failure of such high-profile releases as Poseidon and The Lady in the Water. Insiders predict that LaBute's film may go down as yet another disaster.

Given our bias we probably will not be venturing out to see this at the cinema. We probably will rent it when it is out on DVD. Will it will be “Battlefield Earth bad or “Plan 9 from Outer Space” bad? That is the dilemma!

Agnes said...
This comment has been removed by a blog administrator.
12:33 pm

Can't be worse than the City of Angels, though if I think...nothing impossible whith a remake.

so you will be enjoying zone horror

i love christopher lee. you can't remake him. i don't really understand why the remakes- i guess it is to modernize them for audiences. rehashing someone else's vision rarely works. all i can say is- thank god for dvd rentals.

Very interesting post, Jams! One that may have saved me $7 admissions to my local movie theater. I saw the trailer for The Wicker Man on World Trade Center and thought it actually looked pretty scary (believe it or not, I had no idea it was a remake). However, apparently it's really just another chronicle in Hollywood's Horror Shlock genre. Thanks for the heads up.

I may have to check out the original at some point.

We will know for sure when Hollywood remakes Aguirre the Wrath of God, moving the action from Peru to Poughkeepsie!

Agreed Betmo, The remake fetish shows a total lack of imagination. One remake I DO like though is the new Battlestar Galactica. Although a few too many introspective pauses, it is generally an excellent reimagining of what was a carp idea originally!

Excellent! I save you good money Dave! I really could not see how Hollywood could take the film and not balls it up. Try and get to see the original. You are in for a treat!

As I look at my kids toys and movie collection that includes Scooby Doo, Shaggy Dog, Freaky Friday, Flubber, etc. I realize there are no new ideas and Hollywood just keeps making the same product over and over. The real trick is how they keep changing mediums so that we buy the same thing repeatedly.

My Dad bought Star Wars on Betamax, then on VHS, and yet again on DVD. Just waiting to see when DVD's will be phased out and George Lucas can pocket money from yet another purchase.

Oh no, Nicolas Cage about to fuck up unother good movie!
Why do they insist on trying to fix stuff that isn't broken?
Like why would anybody think it would be a good idea to remake 'The Pink Panther'? Steve Martin as Peter Sellers? I think not.

The changes in formats have been a cash cow haven't they ewbl.. even more so with the new style dvd systems competing for domination (Blu Ray and something else - it is all irrelevant to me as I won't be getting one any time soon!.. That nice mexture of progress and the chance to milk the punters one more time!

Why indeed Pisces? Obviously someone thought that Sellers' turn was stale and could be massively improved by Steve Martin.. Look how he transformed Bilko!