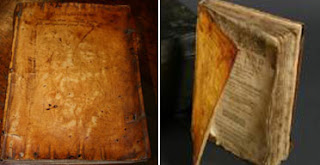 A macabre 17th century book is being auctioned today. A copy of “A True And Perfect Relation Of The Whole Proceedings Against The Late Most Barbarous Traitors, Garnet A Jesuit And His Confederates”, believed to be bound in Garnet’s skin and which appears to bear an image of his face on the cover, will be sold today by Wilkinson’s auctioneers in Doncaster. The book which is an account of the death of Garnet, an alleged Gunpowder Plot conspirator, is described by experts as "rare and macabre". It was printed by Robert Barker, printer to the king, and published in 1606, only months after Garnet's execution.

Henry Garnet's involvement in the plot to blow up the Houses of Parliament was controversial. He claimed he knew about the conspiracy but was not involved. Some scholars now believe that he was most likely trying to prevent the action against James I rather than conspiring against him. He was found guilty of treason and executed in May 1606. The king ordered his hanging but he was spared the cruelty of being drawn and quartered. According to legend, a piece of bloodstained straw found at the scene of his execution started to develop an exact image of the priest's face, which auctioneers now believe has happened to the centuries-old book.

How cool. Not that I'd want to buy it you understand. I know that there is a book bound in human skin in the British Library.

It certainly is a curiosity. I wonder how much it went for in the end

The title made me laugh. The post made me gag.

It is pretty gross eh ewbl!

Great title.
As for the story: Macabre? Bizarre? However. Definitively it's part of Omnium. :)
Thanks for widening my horizon.