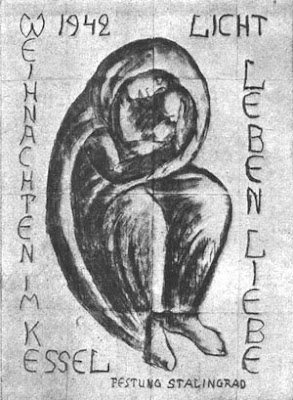 "Christmas week has come and gone. It has been a week of watching and waiting, of deliberate resignation and confidence. The days were filled with the noise of battle and there were many wounded to be attended to. I wondered for a long while what I should paint, and in the end I decided on a Madonna, or mother and child. I have turned my hole in the frozen mud into a studio. The space is too small for me to be able to see the picture properly, so I climb on to a stool and look down at it from above, to get the perspective right. Everything is repeatedly knocked over, and my pencils vanish into the mud. There is nothing to lean my big picture of the Madonna against, except a sloping, home-made table past which I can just manage to squeeze. There are no proper materials and I have used a Russian map for paper. But I wish I could tell you how absorbed I have been painting my Madonna and how much it means to me."

"The picture looks like this: the mother's head and the child's lean toward each other, and a large cloak enfolds them both. It is intended to symbolize 'security' and 'mother love.' I remembered the words of St John: light, life, and love. What more can I add? I wanted to suggest these three things in the homely and common vision of a mother with her child and the security that they represent. When we opened the 'Christmas Door', as we used to do on other Christmases (only now it was the wooden door of our dug-out), my comrades stood spellbound and reverent, silent before the picture that hung on the clay wall. A lamp was burning on a board stuck into the clay beneath the picture. Our celebrations in the shelter were dominated by this picture, and it was with full hearts that my comrades read the words: light, life and love."

This is an extract of a letter by Kurt Rauber, a pastor and a medical officer with the Sixth Army in Stalingrad. It was his last letter from the city before his capture. He died in Soviet POW camp in 1944. The Madonna survived and is now on display in the Kaiser-Wilhelm-Gedächtniskirche in Berlin. There are also copies in Coventry cathedral and a Russian Orthodox church in Volgograd.

A small gesture can remind people of their humanity, even in the jaws of Hell. On this note I will take a short break for Christmas. I would like to thank my small but happy band of regular readers a happy Christmas. I promise that there will be lots more drivel in 2008.

The letter extract is from the Feldgrau website
Posted by jams o donnell at 8:17 pm

Marry Christmas to you and those around you, Jams!

You deserve a break, jams. You've kept us all entertained for nearly two years now non-stop!

Sean, Ewbl, Thanks and a merry Christmas to you and yours

Wishing you and yours a very Happy Christmas.

What a wonderful and appropriate post, jams. Thank you. And Buon Natale to you and yours from Sicily xx

Have a very Happy Christmas, Jams.

Happy Christmas everyone. Ren that it is very good!

What a beautiful account of Rauber's creation of a moving work.

Happy Christmas, jams, to you and the Not-Wife, and may 2008 be your best year yet!

THanks Steve. There is something special about this gesture. In the jaws of hell he tried to keep a tiny flame of humanity alive.

I'm not commenting as I don't have time to read but just wanted to say a very happy Christmas to you and the non-wife. Have a wonderful time.
Love
Lizx

Thanks Liz. And a happy Christmas to you

Merry Christmas Jams - and thanks for a thoughtful peice - my two offerings are a tad less moving...

THanks Poons I hope you manage to drink your weight in gin as planned!

Just popped in to wish you a Merry Christmas!

Thanks Snowflake and a merry christmas to you too

Thanks Dave. I hope you have a very happy Christmas

I hope you have a wonderful Christmas and wishing you all the best for the New Year. As ever, carver

Thanks I hope everyone haqd a great day

I had the same idea (http://blogs.sun.com/vsehr/entry/love">same of using this picture on christmas eve without taking the time to search the web for similar entries. I cross referenced it at the end of my blog now! Hopefully this world will reach a stage where people never need to spend christmas that way again!

Amen, Volker! THanks very much for the link,