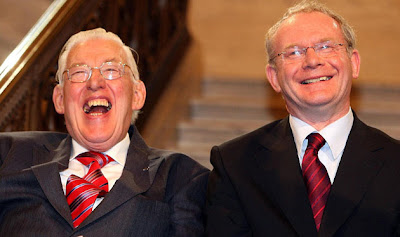 Earlier this month Ian Paisley and Martin McGuinness met Edward Kennedy during a US visit. Previously Paisley would have vilified Kennedy, for his allegiance with Irish Catholics but now he thanked him for his support of successful peace talks. Kennedy on his part called Paisley and McGuinness "almost idealist" in seeking to move their country forward.

I know the Poor Mouth would have to bulk up even to make flyweight in the political blogosphere but if I had to choose one political item that has made me a little less world-weary (as opposed to the thousands of things that have sent my weltschmerz levels thought the roof) it must be the Paisley/McGuinness collaboration.

Let’s face it. who really would have thought this time last year that Ian Paisley and Martin McGuinness would be in the same room as each other, let alone be visiting the USA as the First and Deputy First Ministers of Northern Ireland? I can imagine that there are a lot of people as pleasantly surprised as I am at this turn of events. Who would have thought that Paisley and McGuinness would be praising the Irish cricket team’s success at the World Cup (or that McGuinness liked cricket – I can imagine that admission had some GAA diehards spluttering into their stout!) Who would have thought that they would have been dubbed the Chuckle Brothers (not the real Chuckle Brothers, mind you)

Seriously, the two have put serious differences aside and have worked damned hard in their new roles. The smiles may seem a bit contrived at times but they do seem to have developed a good working relationship. I am sure there will be plenty of scope for disagreement and argument as time goes by but right now they represent stability and that can only be good for Northern Ireland in terms of continued peace and of course prosperity – Northern Ireland must appear a far more attractive place for investment than it has for a very long time.

Although nothing is ever absolutely certain, I do hope that 2007 is a watershed year for Northern Ireland

It would be wonderful if 2008 could see even more fantastic - and unlikely - peace collaborations.

I really hope so too Liz. I really do

I think that - even for these two - the traditional Xmas card photo of the two of them together was ducked this year.

But genearally, you're right. I was in Belfast at the weekend, and even the letters page of The Newsletter was beginning to register that Unionist rejectionism was the equivalent of 'jumping through Sinn Fein's hoops' (though there are still a fair few who call Paisley a 'lundy'.

Thanks for your comment Paulie. I daresay there are a number of "No surrender" bitter enders who would take that view of Paisley, in the same way the idiot rump (Republican SF et all) who believe that violence is still a way to get a united Ireland

Will people still call Paisley a "lundy" if Northern Ireland became a "Rangers Tiger" in the way the Republic became a Celtic Tiger!