End of the line for a forgotten dictator? 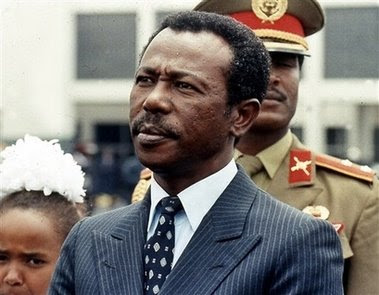 Until today I had totally forgotten about former Ethiopian dictator Mengistu Haile Mariam. I had no idea he had been living in Zimbabwe since he was deposed in 1991. For the last 17 years or so he has, apparently, been dividing his time between a heavily guarded villa in Harare, a farm near the capital and a retreat on Lake Kariba.

Last year an Ethiopian court sentenced him in absentia to death after convicting him of genocide (Genocide under Ethiopian law also covers the destruction of opposition groups). Unsurprisingly, perhaps, Mugabe flatly refused to extradite a man who helped to arm Zanu (PF)’s guerrillas during Zimbabwe’s 1970s liberation war.

According to today’s Times, however, Mengistu’s future looks less assured. Next week the Zimbabwe opposition Movement for Democratic Change will enter a unity government with Zanu (PF) and Nelson Chamisa, its chief spokesman has stated that Mengistu’s extradition to Ethiopia would be “high on the agenda” of that new administration.

“Zimbabwe should not be a safe haven or resting place for serial human rights violators like Mr Mengistu,” he said. “We can’t shelter purveyors of injustice.”

Few Zimbabweans would shed tears if Mengistu, 71, is sent home to the gallows. Mr Mugabe has spent millions of dollars providing him with a villa in a barricaded cul-de-sac in the Gun Hill suburb, with round-the-clock protection and any number of other benefits. In return Mengistu has advised Mr Mugabe on security issues, and was allegedly the mastermind of Operation Murambatsvina in 2006 in which security forces and Zanu (PF) thugs razed the homes of 700,000 slum-dwellers regarded as MDC supporters.

Mengistu has plenty of experience in that field. He seized power after a military coup in 1974 that ended Emperor Haile Selassie’s 44-year rule. In 1976 he mounted the “Red Terror” campaign against opponents of his Derg regime. Over the next few years more than half a million people were thought to have been killed in what Human Rights Watch called “one of the most systematic uses of mass murder ever witnessed in Africa”. The victims included the former Emperor and numerous members of the Royal Family, and Mengistu is said to have executed some of them himself.

He turned Ethiopia into a Marxist state, backed by the Soviet Union, earning the sobriquet the “Black Stalin”. He created giant collective farms that had the same ruinous effect on agricultural production as Mr Mugabe’s land seizures in Zimbabwe, and that helped to cause terrible famine.

In 1995 Mengistu narrowly survived an assassination attempt by two Eritreans as he took an afternoon stroll with his wife near Garvin Close, his Harare home. Otherwise he has maintained a low profile. As Mr Mugabe’s popularity has plunged, Mengistu was rumoured to have made contingency plans to move to North Korea.

As I said I had totally forgotten about Mengistu. I thought he had died years ago. Sadly so many former dictators, be it Amin in Saudi, or any number elsewhere escape retribution dying in their beds. While I do not support his execution he is one of many people I would love to see pay for his crimes. On the other hand I am not sure that the MDC will be successful in extraditing him while Mugabe and his cronies are still around
Posted by jams o donnell at 8:39 pm

Hm, he might get offered sanctuary by the Pius X. Brotherhood, Jams.
Anyway, may he live long with slowly rotting testicles.

It can't be much of a life hiding out like that either... so maybe that is punishment enough!

Even though the cage is gilded Jams, as Cherry Pie stated it is not much of a life. I would prefer to live in a tent and walk around freely and unhindered.

Nevertheless he deserves much worse.

Me too Ardent. On the other hand I bet he felt that a very, very large and very gilded cage is far preferable to the hemp fandango!