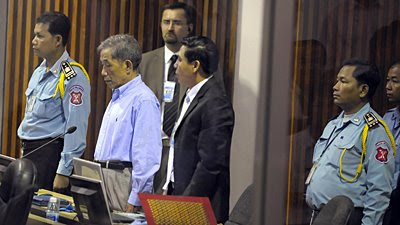 The Guardian carries a report about the opening (at last) of the first trial of a key Khmer Rouge butcher. Kaing Guek Eav, 66, better known as Duch, sat in the dock behind a bullet-proof screen in a court that was purpose-built to house the UN-backed genocide trial.

Duch was the Khmer Rouge regime’s head torturer in a regime that left 1.7 million Cambodians dead.. He is accused of war crimes crimes against humanity for his role in the deaths of at least 12,380 prisoners at Phnom Penh's notorious Tuol Sleng torture centre. Duch, a born-again Christian who has acknowledged his crimes, sat impassively in the court. Wearing a pale blue shirt, he occasionally sipped water and donned his reading glasses to take notes of the proceedings translated through his headphones.

Van Nath, 63, one of only a handful of survivors to emerge from Tuol Sleng, took his place in the queue to witness a day he long remained sceptical he would ever see."This is the day we have waited for for 30 years," said the artist, who was beaten by Tuol Sleng guards but spared because of his painting talent. "But I don't know if it will end my suffering."

Duch is the first of five defendants to appear before the long-delayed tribunal. Although he has made no formal confession, he has, unlike the other defendants, "admitted or acknowledged" that many of the crimes occurred at his prison, according to the indictment from court judges. He has also asked for forgiveness from his victims.

In an indictment in August the tribunal said: "Duch necessarily decided how long a prisoner would live, since he ordered their execution based on a personal determination of whether a prisoner had fully confessed" to being an enemy of the regime. In one mass execution, he gave his men a "kill them all" order to dispose of a group of prisoners. On another list of 29 prisoners, he told his henchmen to "interrogate four persons, kill the rest".

After the fall of the Khmer Rouge, Duch disappeared for two decades, living under two other names and as a converted Christian before he was located by a British journalist in 1999.

Taken to the scene of his alleged crimes last year, he wept and told some of his former victims: "I ask for your forgiveness. I know that you cannot forgive me, but I ask you to leave me the hope that you might." I put up a post about this last year called the The Tears of Comrade Duch.

His defence lawyer, Francois Roux, said today that his client had been in detention for nine years, nine months and seven days, adding: "This situation is unacceptable." (Duch’s victims spent a much shorter time in detention of course....)

The other four facing trial are Khieu Samphan, the group's former head of state; Ieng Sary, its foreign minister; his wife, Ieng Thirith, who was minister for social affairs; and Nuon Chea, the movement's chief ideologue.

My gut says tear the piece of human garbage limb from limb very slowly. My head as ever wishes him a long, miserable and very uncomfortable incarceration.

Having lived in Phnom Penh and visited Tuol Sleng (S-21) more than once, I have never been able to erase the memories of that elementary school-turned torture prison.

They took photos of every prisoner upon entry, whose scared eyes or defiant faces clearly demonstrated they knew their fate. Those unforgettable faces are now posted on the walls for all to see and are seared into my memory years later.

The worst fate -if there was such a thing- was saved for the “VIPs”. They received their own private room with a metal bed and four adjacent iron posts for their wife and children to be shackled. The posts were no higher than a couple feet -just high enough for them to kneel AND show their faces. The father was forced to watch the slow gruesome fate of his loved ones until he met his own. Above every bed is the picture of a barely recognizable “VIP”
–barely recognizable as a human. In 1997 the blood still stained the concrete floor.

If Duch has repented and converted to Christianity, so be it. Let him explain his actions to God and see how far he gets. That will do nothing for him in Buddhist Cambodia. His fate is likely predetermined by whomever Hun Sen or the UN has chosen for his jury. At least he won’t be allowed to die without official judgment like Pol Pot in his jungle camp in peace while surrounded by his cadres in 1998. All Duch can hope for is a respectful end –something he never gave the THOUSANDS of real people who’s faces cover their place of horror for which he was –and is- responsible.

It is amazing how often communist butchers do not get prosecuted. While
the butchery was going on Chomsky called witnesses to the genocide liars based upon the reports of a communist publication in Australia with a circulation of around 10.

Adam Imcan't imagine how sobering a visit to Tuol sleng actually is. He will be found guilty and he will be given more consideration than he gave any of his victims. It is when I see people like him I really do wish there was such a place as Hell because earthly punishment is not enough for what he did.

I never took notice of his political writings. I did a course in psycholinguistics and his academic writings were enough to put me off him for life

Adam, words cannot express the sorrow in my heart for you and yours.
Jams, thanks for reminding us of the wickedness that moves within and around us. If, indeed, this man is/was a convert, the first thing he should've done was to present himself before a magistrate and confess. In the N.T., the book of James speaks eloquently about actions in the face of conviction.

I never know where I stand on this sort of thing. Mainly because I'm not a fan of the UN and the idea that some leaders like this one get what's coming to them, but people like Blair etc are let off the hook.

I think so long as the result reflects the wishes of the people of Cambodia that is what is important.

Yes but will he get his?

Time magazine had a very interesting quote from a woman in front of the courthouse selling DVDs about the Khmer Rouge to tourists. She had lost her children to starvation when the Khmer Rouge were in power and I think her take on the situation is very interesting. It's at the end of this newsy story: http://www.newsy.com/videos/khmer_rouge_death_camp_trial/

About time this villain sees some justice. I only hope he lives to see the verdict, unlike some of his more notable compatriots.

THanks everyone. I hope this is where he gets justice

It is amazing that as an American student I learned about Zionism and Hitler. The media continues to cover the fate of the Jews. Now, the events in Cambodia were both directly and indirectly results of American involvement in that country, and I see almost nothing of the Tribuanls in American media. Most Americans know little to nothing of the Pol Pot regeime and Cambodian history. American foreign policy has been evil to many innocent poepple around the world. How many more corrupt Lon Nol style puppets will we responsible for? And, not be accountalbe for their deeds?