The Good Soldier Cushing Part I 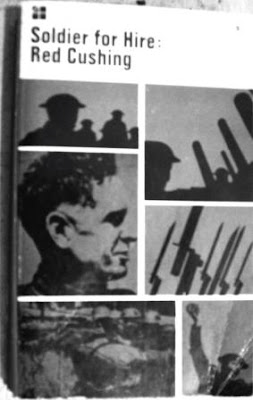 It’s been a while since I wrote about Thomas “Red” Cushing. I promised to do so a lot earlier but hey ho! This is the first of a group of posts covering Red Cushing’s time between leaving Spain disillusioned and his time in Sachsenhausen with Yakov Stalin. This is taken from his autobiography “Soldier For Hire” (John Calder 1962)

After arriving in Victoria (stopping only to belt a Daily Worker seller in Paddington see Red Cushing and the Spanish Civil War Part III), he made his way to Cardiff to enlist in the Royal Iniskilling Fusiliers. After a relatively uneventful time (for Red that is!) involving a few boxing matches, and a fair bit of drinking, he was posted to Darlington and then Hereford to man a searchlight unit, he was sent to France as part of the British Expeditionary Force.

He spent four months digging fortifications until the Wehrmacht decided it wanted to spend its 1940 summer holiday at the French seaside. Like many other members of the BEF the next few weeks were a story of chaos, desperate fallbacks and futile attempts to regroup. Near Douai his unit did manage to blow a bridge taking several German armoured vehicles with it.

Caught behind the German lines Cushing and several other soldiers found shelter in a bistro cellar filled with an impressive range of drink. Building a bar out of a few crates Cushing and comrades embarked on what he described the greatest drinking bout of the century. Cushing was still resolved to do his duty. He was determined to fight out the war to the last bottle.

Alas things did not work out quite that way....
Posted by jams o donnell at 9:46 pm

I'd never heard of him. Can't wait to read more, jams.

He certainly was a larger than life character!

He was definitely a larger than life person Snoopy!

I hadn't heard of him before either!

I know of him vaguely. I'm looking forward to reading more!!! Thanks!

He was an utterly larger than life character. I think you need to take what he says with a pinch of salt though.