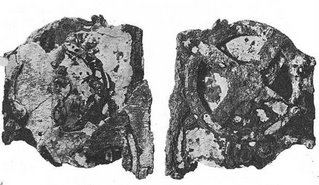 Again this is hardly hot news as such but it seems to have made the papers today , including the Guardian and the Independent . It would seem that scientists have finally worked out how the 2,000-year-old mechanical device salvaged from a Roman shipwreck operates.

The machine, which dates to 65BC, was found on a shipwreck in 1900 by sponge diver, Elias Stadiatos. Since its discovery, scientists have been trying to reconstruct the device, which is now known to be an astronomical calendar capable of tracking the position of the sun, several heavenly bodies and the phases of the moon. Experts believe it to be the earliest-known device to use gear wheels and by far the most sophisticated object to be found from the ancient and medieval periods.

Using modern computer x-ray tomography and high resolution surface scanning, a team peered inside fragments of the crust-encased mechanism and read inscriptions that once covered the outer casing of the machine. Detailed imaging of the mechanism suggests it dates back to 150-100 BC and had 37 gear wheels enabling it to follow the movements of the moon and the sun through the zodiac, predict eclipses and even recreate the irregular orbit of the moon. The motion, known as the first lunar anomaly, was developed by the astronomer Hipparcus of Rhodes in the 2nd century BC and he may have been consulted in the machine's construction, the scientists speculate.

Remarkably, scans showed the device uses a differential gear, which was previously believed to have been invented in the 16th century. The level of miniaturisation and complexity of its parts is comparable to that of 18th century clocks. One of the remaining mysteries is why the Greek technology invented for the machine seemed to disappear. No other civilisation is believed to have created anything as complex for another 1,000 years. One explanation could be that bronze was often recycled in the period the device was made, so many artefacts from that time have long ago been melted down and erased from the archaeological record.

Although the news story tells us a little more of what was already suspected, I am so glad that the casing inscription doesn’t say “Property of Blurgon, Omicron Persei 8”. Erich Von Daniken would have been insufferable if it did!


Antikythera mechanism
Posted by jams o donnell at 7:58 am

Fascinating and amazing. I suppose there's no possibility the thing is a fake, or incorrectly dated? Presuming it's for real (and at this point, I do), I stand in awe of whoever conceived of, designed and (especially) constructed it. Most examples I've seen of similar devices were made in the 18th century.

(Blogger bombed on my first attempt; please forgive me if this is a double-post.)

It doesn't seem to be a fake - if it is then it is an exellent one. What is evident, whether this is a fake or not, is that ancient humans were far more skilled than they were given credit. That's why arseholes like von Daniken could spout his brand of bullshit.