Bob Marley and the Banana Splits? 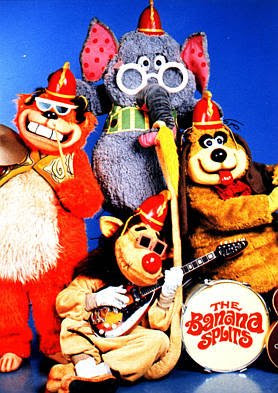 According to the Bob Marley Foundation in Jamaica, the reggae legend would probably never have heard of the Banana Splits, let alone be inspired by them. Spokesman Paul Kelly says he is unfamiliar with the TV show, and nor has he dealt with other inquiries about the Banana Splits.

...." it's reggae - it's got the 'one drop beat' of the bass guitar and drums. The Wo yo yo is just Bob Marley being creative; it is Jamaican slang, an exclamation, a joyful noise the Jamaicans make when they laugh at a joke." he said. The song has a serious message: "In America, the red Indians used to say the black people resembled buffalos because of their dreadlocks - so 'Buffalo Soldier, dreadlock rasta' - and the song is about them being 'stolen from Africa, brought to America, fighting on arrival, fighting for survival' about 400 years ago." 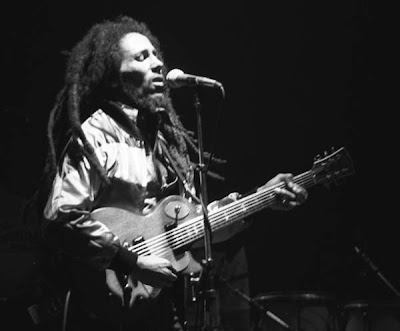 Fleagle in concert
But a musicologist, who asked not to be named for professional reasons, says the songs are "strikingly similar. The main differences are in bars two and six, where the timing and inflection in Buffalo Soldier is more jumpy and Marley sings with a groove, whereas the Banana Splits theme song is "straight". And in bars three and seven, a note is gained in Buffalo Soldier or omitted in The Tra La La Song. "The other difference is in bar four - where the final note goes down to a C in Buffalo Soldier but up to an E in Banana Splits. In bar eight they both go down."

Well there you have it. Will the Bob Marley foundation be required to pay royalties to the creators of a kid’s show? Somehow I doubt it but I wish I could get that damned banana splits song out of my head... Oh oh Chongo!

Now that has brought back some memories... Showing my age now ;-)

Hah I feel rather old too Cherie!

Hi, this comment is very peronal.
You know my son died on May 18 this year. (thanks for your sympathy)
We did bring his cuffin out from the church with a live band playing:
Three Little Birds.
See?

Thanks for bringing back memories of the Banana Split!!

What a wonderful choice of songs Tor.

I know they were very popular but if he didn't watch tv in Jamaica they could ahve passed him by... But perhaps he did know about Weirdo wolfie!

I use to watch this show. I'm feeling rather older now than when I first got here!

Sounds like a rip off when you listen on the BBC site. Great memories of the Banana Splits.

Buffalo Soldiers National Museum, in my very own hometown... yes, I've been there. I didn't see Bob Marley there, though; he was already deceased. (Seriously, it's a different usage of Buffalo Soldier.)

THanks Steve that loks like a very interesting museum.

one banana two banana three banana four
all bananas make a split so do many more
over hill and highway the banana buggies go
come along to bring you the banana splits show...

I love the Banana Splits!! Always wanted one of them banana buggys lol.

Yes, but what about the Buffalo Springfield Soldiers?

Ha ha that ould have been fun nunyaa!

Ah I think they are drawing their pensions now ewbl!

according to wikipedia bio of B.M. he lived USA -"In 1966, Marley married Rita Anderson, and moved near his mother's residence in Wilmington, Delaware in the United States for a short time, during which he worked as a DuPont lab assistant and on the assembly line at a Chrysler plant, under the alias Donald Marley" Wilmington Delaware USA is about 40 miles from philadelphia where the Banana Splits was broadcasted from. Wilmington during those days would have had no more that 6 tv channels unlike today (all philadelphia channels). The banana splits would have been on every morning, and Bob Marley MOST certainly would have heard that song either consciously or unconsciencly (sp?). I hypothesize that if he worked overnight shift at the auto plant, came home and lit up a spliff and turned the tv on 1 of the only five channels broadcasting would be showing the Banana splits.
Mark William Casey (clifton heights near philly).

Thanks for your post Anon. It is an intriguing idea

The melody is traditional, and both artists used the same traditional melody. There is no evidence that Bob Marley copied the Banana Splits, or that he ever even heard their song.

Two very similar traditional Caribbean melodies are found in Bob Marley's song "Jump Nyabinghi," which clearly comes from traditional "Nyabinghi" roots (Marley definitely participated in many Nyabinghi sessions in his native Jamaica -- please listen to the song), and "Fifteen men on a dead man's chest, yo ho ho and a bottle of rum," a melody sung since way before the 1960's by scores of Caribbean sailors and pirates.
_________________


NOTE – Although the lyrics of "Fifteen men" are fictional, the melody in which it is sung is definitely taken from a traditional West Indian sea shanty (Blow the Man Down). I used these lyrics in my post, however, because they are the most familiar lyrics to most people, and are only used to bring the melody to mind. The lyrics are not in dispute anyway.
_________________

Just because Banana Splits precedes Buffalo soldier in history and has a similar rhythm does not prove, by any means, that Bob copied Banana Splits -- to say so is a logical fallacy (Google “post hoc ergo propter hoc”), especially given the evidence of prior melodies that are similar to both songs.
_________________


Specific references:
"Sea Shanties: Haul Away For Rosie"
"George London - Blow the man down - sea shanty!"
"Phil Beer: "Blow, Boys, Blow!" - A Sea Shanty"
Please listen to the above three songs on Youtube. All of them precede Banana Splits in history by a wide margin, and all three are very similar to Buffalo Soldier.
Obviously, Bob copied these traditional melodies (or similar melodies, such as those in Nyabinghi sessions), and Banana Splits also copied these traditional melodies.

Yet another similar melody is heard in the traditional "Take Me Out to the Ball Game," from 1908, also borrowed from traditional sea shanties.

Note that Marley first recorded "One Love" in 1965, which predates the recording of the Banana Splits song by three years.

This means that it’s more likely that the Banana Splits copied Marley.