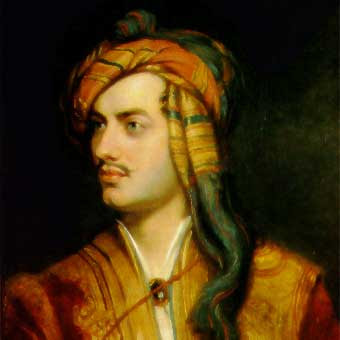 "My Lord, Tho I have not the honor of being personally known to you, I yet venture to address you; tho, I cannot offer any other excuse for the Liberty I take, if the irresistible desire I feel of thus (unknown) paying my humble tribute at the Shrine of Genius, be not deemd any apology... I have hung in rapt attention over every Line of Child Harold, I am not a Critic but an inexperienced young Woman, but the language of genius & of nature must be felt & never makes its appeal in Vain to my heart..."Letter from a girl who signs her name Anna, dated September 1812

He may have been mad , bad and dangerous to know but that did not stop women from deluging him with fan mail accroding to the Independent . The unpublished letters show the ardour of Byron's fans, who often laced their notes with daring sexual undertones and breathless fantasies. Contrary to the popular opinion of Byron as an aloof and reclusive poet who did not invite public adoration, the letters suggest that he relished being adored and wrote suggestive poetry that "flirted" with his readers, inviting them to respond in kind.

Many of the notes were brief and untidy, and were kept by Byron despite the fact that most of their female authors asked him to dispose of them, as their language would have scandalised respectable 19th-century society. That he ignored the women's pleas and apparently kept the correspondence as "trophies" further undermines the myth that Byron was a reluctant literary hero.

While the letters of notable women who wrote to Bryon have been studied in the past, such as those from the novelist and aristocrat Lady Caroline Lamb, these 45 epistles – the remains of hundreds of unnamed fan letters that Byron admitted to receiving – have never before been published.

"Turn not from this address because the writer is anonymous... You are unhappy – a being feared and mistrusted, even by those whom the fashion of the hour leads to flatter you – you are "alone on earth" – There needs no more to excite a deep interest for you – but, the interest I feel – the eager wish for power to contribute... to your happiness – arises from sympathy adding strength to compassion...Letter from an anonymous writer, 7 May 1812

Ms Throsby, who has transcribed all the anonymous letters in Scotland's Murray Archive, said that Byron's admirers were often literary themselves. The letters, she added, marked the advent of celebrity fan mail which became a staple phenomenon in the 20th century but was rare in Byron's lifetime.

"They were often personal outpourings – some were written as poetry and some cast him as one of his own poetic characters," she said. "The women, who ranged in age and social class, may have been spurred on by Bryon's cultivated image as the brooding Romantic hero who had suffered heartbreak in early life, she added.

The letters often contained sexual metaphors, as well as poetic elements such as one note written in verse that said: "Why, did my breast with rapture glow?/ Thy talents to admire? Why, as I read, my bosom felt?/ Enthusiastic fire." The writer later spoke about "trembling" as she gazed at Bryon's portrait.

The correspondence, which is soon set to be digitised for public view by the National Library of Scotland, also reveal a darker side to his devotees' zeal. A woman who called herself Echo wrote to Byron as a "kindred spirit" who might be able to heal his "wounded heart". But the language in a second letter is far more ominous, suggesting a meeting after midnight and casting herself as a sexual predator.She wrote: "Should curiosity prompt you, and should you not be afraid of gratifying it, by trusting yourself alone in the Green Park at seven o'clock this evening, you will see Echo. "If this evening proves inconvenient, the same chance shall wait you tomorrow evening at the same hour ... "Should apathy or indifference prevent your coming, adieu forever!"

On 15 July 1817, Byron wrote to his publisher, John Murray: "I suppose in my life I have received at least 200 anonymous letters – aye – 300 – of love, literature, advice, abuse, menace or consolation, upon all topics and in every shape".

"My Lord, You cannot retire to any part of the civilized globe, where you will not be followed by the echoes of the world's applause. You must be satiated with the sound of public praise – but you may yet endure it in the still, small voice of a retired and nameless individual who has admired your splendid abilities from their very dawn."Excerpt from a letter by "A Stranger", 17 April 1819:

Lord Archer claims to have received many letters from female admirers. The combination of a peerage and a mad glint in the eye seems to be a pussy magnet.

In Lord A's case a magnet for those several sarnies short of a picnic, perhaps!

I am not sure that todays equivalent admiring missives would be so romantic. More likely by sms and email or comments on a web page. How interesting that he was such a sex magnet.

I can imagine they would be more direct Colin!