A fortunate rebuff for my father

Ask my father why he left Eire join the RAF armed with a doctored birth certificate he will say that it was because he wanted adventure. Ask him if it was for ideological reasons and he’ll tell you that if he thought he had an ideology he’d go to the doctor!

Before he tried to join the RAF he says he tried to get a post as a Cabin Boy on the SS Irish Pine, a vessel owned by Irish Shipping Ltd. He was told at the time that he was too young to go to sea. 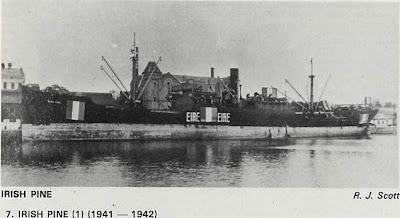 This rebuff was just as well: on 16 November 1942 the Irish Pine was en route to Tampa, Florida to load a cargo of phosphates bound for Dublin. At 00.14 hours, U608 commanded by Kapitanleutnant Rolf Struckmeier fired one torpedo at the Irish Pine which hit the stern. The crew began to abandon ship, but it sank rapidly at 00.17 hour. All 33 perished:

As with other Irish vessels at the time, the Irish Pine would have been brightly lit. As can be seen from the above photograph it had the words Eire and the Tricolour on both sides. Why it was attacked is unclear.

I have no idea if my dad is telling the truth about the Irish Pine but by November 1942 he was spending an inordinate amount of time giving German AA crews something a target to shoot at....

Some sources of information on Irish shipping during WWII

To think you would not exist if he had gone on that ship. That is a sobering thought. I'll bet he thinks about it himself often.

He does jmb. I'm surprised I made it at all. My grandfather was lucky enough to be taken prisoner at the start of WWI, my dad made it through WWII when most aircreww of his service were killed, and then my mum had terrible time during pregnancy...

Irish Pine is a funny name for ship. It sounds more like a cleaning product.

I'd say that your dad was LUCKY but I know that it was more than luck. Your dad was freakin blessed to walk away from his "adventures" relatively unscathed!

He obviously wasn't meant to be on that ship!

He was EWBL.. most RAF bobmer crews who first flew in 1942 would ahve died. Luckily for him he flew the Mosquito which was very flast and took relatively few losses

Glad you found it interesting Richard