An Arsehole Not a Criminal 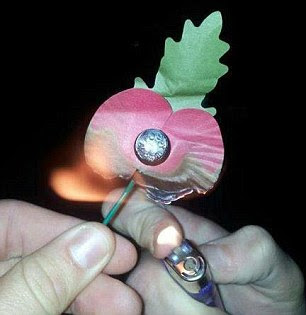 A 19 year old  has been taken in for questioning after loading the above image of him burning a poppy. According to the Mail he included the caption "How about that you sqaudey (sic) c****"  Not sure if he wrote c with the asterisks or cunts.


After a comlaint to police House was arrested on suspicion of malicious telecommunications. He apears still tobe in custody at time of writing.

Given the nature of the poppy symbol and the day in question it was an obnoxious and crass thing to do. Being drunk at the time as he may have been  does  not provide mitigation. But should he have been arrested?

No. What the arsehole needs is a proper lesson in what the poppy represents and not to be such a bloody idiot in future
Posted by jams o donnell at 4:31 pm

Now this sort of thing increasingly concerns me. He is perfectly entitled to burn a poppy and photograph it and post it online, I would have expected, in this supposedly "free" land, regardless of whether the reason was that he is a drunken fool, or disapproved of our troops killing people in other lands (as they do) or is a mystical artist, or whatever. Over recent months, with issues like this online and on facebook and twitter, I detect the thin edge of a very dangerous wedge slipping into a narrow gap that could easily widen. I hope I don't get into trouble for saying so...

And I very much doubt that he needs "a proper lesson in what the poppy represents" as I am fairly sure that he knows perfectly well what it represents. When people start getting arrested for such gestures that the majority of people may disapprove of, the majority becomes a dictatorship.

The whole thing is an over reaction to a probably drunken prick who thought it would be a good idea to impress his mates by doing something controversial.

Arseholery in itself should not be an arrestable offence. If he's not inciting a pogrom or the like then he's not committing a crime.I have the right to think he's an arsehole.

As for the proper lesson a reminder what the poppy represents is what I had in mind.

We've been seeing wankers getting jail time for being wankers/ That Robin Hood Airport tweet thing for example... or when government briefly considered shutting down social media in the even of another riot (shit I didn't thin I'd woken up and found myself in Tehran!)

Subject to incitement to commit a crime peole shoud say what they like. Conversely I have the right to think they are fuckwits but not to have them jailed

Well...we have an asshole, in Canada, who desecrated a War Monument, on the 11th, writing on it, "Burn Canada. Praise Allah!" I don't know what the culprit used. It's hard to erase.

The majority of us disapprove. I hope the culprit is found and arrested.

We owe our today freedom to the fact that some of our veterans, dead or alive, have killed soldiers on other lands. Too bad if some people don't like it. The Day of Remembrance should be respected and observed.

No question about it, the guy is stupid and his gesture was in extremely bad taste.

But ... What's the difference between him and the asshole who made the recent lousy and offensive Muhammad film, or Kurt Westergaard (who drew that famous Muhammad cartoon), or Monty Python's Life of Brian (though the last two are at least of some artistic quality)? Or the anti-Vietnam protesters who burned the Stars and Stripes?

Freedom of expression is also freedom of expression for those who express themselves in an obnoxious manner. It's a cornerstone of the Western values of tolerance - a central point in the current clash of values between the West and Islam. There can be no compromise on it, especially when we Westerners ourselves are insulted.

In this case Claude I agree that was a case of malicious damage. The perpetrator deserves to be punished

That is the sum of it Francis. The guy was a twat but so long as he wasn't inciting violence etc he committed no crime

There are definitely limits. Someone wanting to kill all Jews does not deserve tolerance.