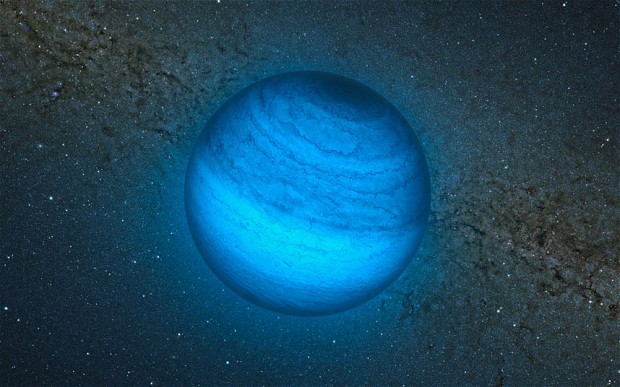 Artist impression of CFBDSIR2149 - from the Daily Telegraph

The Telegraph  reports that scientists have discovered the first first ever homeless planet - one that does not orbit a star.

With a truly snappy provisional name CFBDSIR2149 is the first isolated planet of its kind ever to be discovered by scientists, after more than a decade of searching in a process described as “looking for a single needle in amongst thousands of haystacks." Up to seven times the size of Jupiter, it is free-floating with no gravitational link and meets the specific criteria of mass, temperature and age to be designated as a “planet”.

Between 50 and 120 millions years old, it has a temperature of approximately 400 degrees Celsius and is believed to be part of a group of around 30 very young stars known as the AB Doradus Moving Group. he planet was discovered by researchers at the University of Montreal, who consulted with French colleagues and data from the Canada-France-Hawaii Telescope and the European Southern Observatory's Very Large Telescope.

Although scientists have known this type of “homeless” planet existed, they have not been able to
observe one until now.

It is believed the isolated planet could have been flung away from other bodies during its formation.
Its very existence already supports theories that this type of “homeless” object is more common in
space than currently thought.


"Although theorists had established the existence of this type of very cold and young planet, one had never been observed until today," said Étienne Artigau, an astrophysicist at UdeM.
"This object was discovered during a scan that covered the equivalent of 1000 times the surface of the full moon.We observed hundreds of millions of stars and planets, but we only found one homeless planet in our neighbourhood. Now we will be looking for them amongst an astronomical number of sources further afield. It's like looking for a single needle in amongst thousands of haystacks."

The team of astronomers have finally been able to study it due to its comparative proximity, and the absence of a bright star very close to it.

"Looking for planets around their stars is akin to studying a firefly sitting one centimetre away from a distant, powerful car headlight," says Philippe Delorme, lead author from the Institut de planetologie et d'astrophysique de Grenoble, France. "This nearby free-floating object offered the opportunity to study the firefly in detail without the dazzling lights of the car messing everything up.

Again another truly fascinating find. In ten years I have no doubt their discovery wil be common place. Still this is an excellent discovery
Posted by jams o donnell at 11:09 am

I love these stories, but they always make me think we need a better system for naming celestial bodies. This one deserves better than "CFBDSIR2149"!

I was thinking Ahasver but I doubt that one will happen... Melmoth?

As you said it is fascinating!

It is actually now called Begonewithyou and it was kicked out of orbit because it was populated by idiots.

It is isn't it Cherie

I do have to laugh at these silly "artist's impressions" though. All we know is that it's big, it's round, it's quite hot...

(PS: Interesting to see that Aileen has hacked into my internet account and netbook. Little pest. Nobody will believe me though, as usual, which may be difficult given where she has just told the Presidents of the USA, China and Russia to go, by email, from my account, and what to stuff themselves with, and where... She needs a rest from humanity. So do I.)

True. I bet Aileen when not insulting world leaders, could tell you that it's actually pink

I didn't think 400 degrees C was cold. And I thought the word planet meant "wanderer".

It does mean wanderer but they tend to wander in pretty much fixed orbits around a star!