Go and play with a Nintendo you little brat 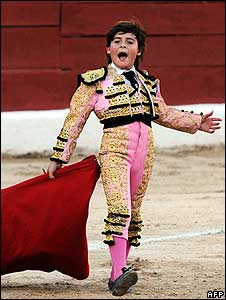 The controversial spectacle was given a last minute go-ahead by the authorities despite pressure from child protection and anti-bullfighting campaign groups. Merida's mayor had suspended the record attempt, saying it was illegal for youths under the age of 18 to take part in high-risk public performances. But the state prosecutor's office overturned the ban just hours before the fight after Michelito's father - a former French bullfighter - launched an appeal.

Some 3,500 people, including many children, reportedly gathered to witness the fight at the ring in the eastern city of Merida in Yucatan state. The child matador is already an international star in the world of bullfighting. He first entered the ring when he was four, killed his first bull calf two years later and has since taken on dozens of animals around the world.

"The bullfighting opponents shouldn't stick their nose in things they don't like," he said ahead of his record attempt. No-one is forcing them to watch bullfights or to keep informed about them. It's as if I told a boy who does motocross not to do it, it's very bothersome."

Last year, the child prodigy (PRODIGY?) caused a public outcry in France while he was touring the bullfighting circuit there. Several cities banned him from killing animals during his appearances after anti-bullfighting activists waged a high profile campaign. They said they had targeted him over other younger matadors because "he fights in corridas [bullfights] aiming to kill".

To be honest I will not shed a single tear if this little brat gets gored by one of the bulls – after all it is an occupational hazard of the so-called sport. As far as I am concerned bullfighting is a barbaric spectacle that should have been consigned the dustbin of history a long time ago. Michelito should go off and do something far more productive with his time like whacking off and playing video games.
Posted by jams o donnell at 1:19 am

Well I don't think I will go so far as to want him gored but I agree with everything else you've said. I can't believe bull fighting still is legal and I cannot imagine anyone could enjoy it.

I'm with JMB on this. I just don't get it. But then I am Scottish and we like to inflict pain on each other with broken glasses and knives.

I found the idea of this arrogant litle brat killing bulls particularly revolting. I don't advocate his being gored but it is an occcupational hazard...

One wonders if someone will have taught him to conjugate verbs - preferable to start with 'die' - before a 'majestic' bull offers him the chance to talk shop with Hemingway, or not.

Hmmm... He's Mexican and I don't believe he's doing it in your country. So what does it matter?

I totally agree with you

As far as I am concerned anything between consenting adults, that does not involve adults or children is fine. As for sports I have no problem with consenting adults pummeling the crap out of each other in a ring. I draw a line at anumal cruelty.

Bullfighting is a senseless and uncivilized blood sport. Allowing a child to participate repeatedly is a still more uncivilized act.

My late father, an amateur painter, painted my grandmother a picture of a bullfighter, mainly because the costume was colorful. The painting was consumed in a house fire a few weeks after my grandmother's death. Although I have quite a few of my father's paintings, I can't say I miss that one at all.

Jams, I had the first same initial reaction you did, the little brat needs to be gored, but then again, you should remember how he's been raised. I'm not excusing what's going on, but still, he's been raised with a bullfighting family and by a father to whom he doubtless looks up to and admires like all small boys will. Add to this that he lives within a limited circle of family and acquaintances and he sees the acclaim that his father is greeted with, and surely you can understand this is as much a form of child abuse as it is animal abuse.

Seriously, the best thing that could happen would be for him to be removed from that family, not because his father and possibly other relatives and family and friends are bullfighters, which is after all unfortunately still a legal sport. Mainly it's because it would seem they are not only endangering him but in doing so are hoping to profit from him, much like a Hollywood child-star's self-centered and manipulative stage mother. Only of course this is much worse even than that.

Needless to say I abhor the animal cruelty as well. I usually have more sympathy for them than I do humans because at least humans can comprehend what is going on, animals don't have a clue as to why they are being treated like this.

Actually I don't advocate him being gored but I wouldn't shed tears... just like the macho shitheads at Pamplona. I despise animal cruelty. I simply cannot see what pleasure there is in watching a bull being goaded and killed