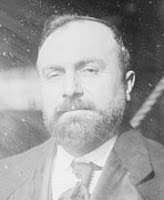 I suppose it is the fate of futurologists (or Tomorrow’s World presenters) to be mocked in the years after their predictions. According to the Guardian Henri Antoine Jules-Bois (1869-1943, left) was once a futurologist. He had an interest in what he called "the superconscious" and he considered himself a "philosophical prophet" with the ability to predict the future.

In 1909, he was interviewed in the New York Times who asked for his vision of what life would be like 100 years in the future.

"M Bois believes that motor cars will in a hundred years be things of the past," noted the paper, "and that a kind of flying bicycle will have been invented which will enable everybody to traverse the air at will, far above the earth.... "Hardly anyone will remain in the cities at night. They will be places of business only. People of every class will reside in the country or in garden towns at considerable distances from the populous centres. Pneumatic railways and flying cars and many other means of quick transit will be so developed that the question of time will enter but little into one's choice of a home. Transportation will be immensely cheaper than it is at present. As there will be less crowding, realty values and rentals will be less exorbitant."

"Most interesting of his predictions", noted the paper, was that "the present ideal of feminine beauty will have ceased to be held by the majority of the Caucasian race. Physical weakness, extreme delicacy of physiognomy, and acquiescence in a mere secondary position will have given way to a type in which beauty and muscular development will be combined. Strange to say, the Paris press has not yet pointed its arrows of ridicule at the prophet.... Perhaps it is because the average Frenchman has no deep-seated objection to woman doing a large share of the world's work, such as the American man appears to have."

Ah the prospect of being driven from my country retreat on some sort of flying bicycle by my muscular, yet attractive, female chauffeur. Still I’m sure it is no more ridiculous as some of our own predictions will sound a century from now
Posted by jams o donnell at 8:22 pm

Email ThisBlogThis!Share to TwitterShare to FacebookShare to Pinterest
Labels: futurology

"Most interesting of his predictions", noted the paper, was that "the present ideal of feminine beauty will have ceased to be held by the majority of the Caucasian race. Physical weakness, extreme delicacy of physiognomy, and acquiescence in a mere secondary position will have given way to a type in which beauty and muscular development will be combined.

Fascinating post. Not long ago I read an article about other futurist predictions. Perhaps things haven't worked out for the universal good the way futurists liked to predict because the futurists didn't envision the concentration of wealth we have today or the fact that the industrial revolution would reestablish feudalism within the borders of "free" countries.

Ah I didn't know that James

I love the fanciful predictions of futurologists. I really do wishthat some of the utopian predictions would come true Randall

I always wonder what medical procedures/treatments we are doing today which will be considered stupid/barbaric in 100 years. Or what substance will turn out to be the new DDT.

It's inevitable that some of procedures will be seen that way. I would imagien that brain surgery is the prime candidate