I remember the name Vesna Vulovic from the Guinness Book of Records as a child. Miraculously she survived a 33,000 feet (10km) fall and became (cue Roy Castle) a record breaker by surviving the highest fall without a parachute.

On January 26 1972 Vulovic was a flight attendant on JAT flight JU367 from Stockholm to Belgrade which exploded in mid air. The other 27 persons on board were killed. At the time the Yugoslav Government claimed that the explosion had been the work of Croatian nationalists. 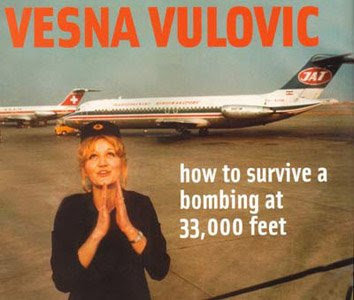 However the official account has been challenged by two journalists who claim it was a fabrication by Communist authorities to cover up a mistake. According to Tuesday’s Guardian, Peter Hornung and Pavel Theiner, investigative journalists in Prague, JU367 was probably mistaken for an enemy aircraft and shot down by a Czechoslovakian air force fighter, causing it to fall and break up at a much lower height than previously believed.

Based on secret documents, mainly from the Czech civil aviation authority, unearthed after more than a year of research, Hornung said he did not believe the aircraft was blown up by Croatian nationalists. "It is extremely probable that the aircraft was shot down by mistake by the Czechoslovak air force, and in order to cover it up the secret police conceived the record plunge," he said. "No doubts have ever been expressed regarding the fall. The story was so good and so beautiful that no one thought to ask any questions."

According to an official version of events Vulovic had been in the tail section of the plane, even though eye witnesses have repeatedly said they found her in or around the middle, above the wings. She suffered a fractured skull, broken legs, and three broken vertebrae.

The new investigation says villagers from Srbská Kamenice, the Czechoslovakian village near the East German border where the JAT DC9 fell, reported having seen the plane intact but on fire below the clouds before it broke up. That and the small area of crash debris indicated the plane had disintegrated at around 800 metres. A second plane was also spotted.

Soviet leader Leonid Brezhnev and his East German counterpart Erich Honecker were reportedly in the air at the time after a conference in Prague, supporting the theory that the DC9 was mistaken for a military threat to them.

Vulovic has no memory of the crash and can only recall boarding the Zagreb-bound flight before it took off in Copenhagen. When interviewed recently she said she would not be disappointed if the world record turned out not to be true. After recovering from her injuries she took a desk job at JAT, but she was fired from her job in 1990 after expressing opposition to Yugoslav leader Slobodan Milosevic and taking part in rallies against his rule.

Vesna Vulovic in 2008
Vulovic, 59, lives in Belgrade and is still considered a heroine throughout the former Yugoslavia. She continues to have an active but low-key role in politics, protesting against Serb nationalism. In an interview with the New York Times last summer, she said: "I am like a cat ... I have had nine lives. But if nationalist forces in this country prevail, my heart will burst

I have no idea whether Hornung and Theiner have put on their tin foil hats or not but it is an interesting idea. More over I do admire Vulovic’s stance on nationalism. More of her sort might have consigned Milosevic to the dustbin of history sparing large parts of the former Yugoslavia years of death and destruction.
Posted by jams o donnell at 6:21 pm

I would be inclined to believe the Czech version of events. One cannot help but admire her, as you say.

What an amazing story of a very admirable lady.

She is a remarkable woman, whether she survived the fall or not

It's more behinde the Curtains we do, oddicial, knew about

I don't follow.. Do you mena there's a lot that happened that we still don't know about?