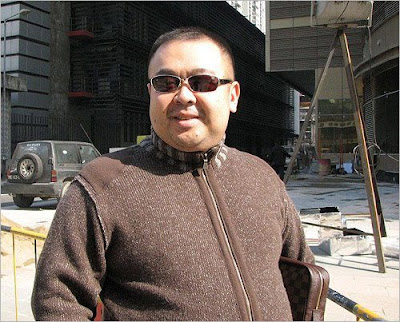 Kim Jong Cartman, err, Nam
I’m sure this could well be speculation and surmise with a side order of scuttlebutt but it’s still curiously interesting. According to a recent there are Telegraph article Kim Jong-il has put a stop to debate on his successor.

Apparently, according to analysts Mr Kim is reluctant to allow any of his three sons access to the levers of power as he is unimpressed with their political abilities. He has more confidence in his previously little-known daughter, who has recently emerged from the shadows and has his ear, but is ruled out by her sex in North Korea's chauvinistic society.

Mr Kim's sister, who is close to him and whose husband is one of the most powerful men in the regime, is said to be supportive of the dictator's oldest son, Jong-nam. One report in South Korean media suggests his personal assistant, widely believed to be his mistress, backs one of the other two. But none of these women has dared to propose any of the three for power, and Mr Kim himself is said to be resolved to prevent either them or anyone else from raising the subject until 2012. 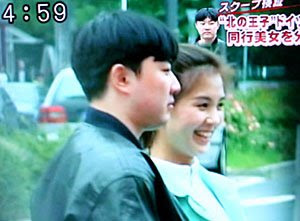 Kim Jong-Chol
Women seem to play a major role in the life of Kim Jong-il. But his relationships are complicated by the puritanical disapproval directed at his girlfriends by his father, the late "Great Leader" Kim Il-sung, on whose reputation his own rule depends.

Leaving aside his relationship with his current "personal assistant", none of his three sons was born to his one formal wife, Kim Yong-suk. With Yong-suk he is believed to have had two daughters, one of whom, Kim Sul-seong, 34, is the most trusted legitimate confidante among Kim's immediate family circle. She is a deputy director in charge of personnel in the ruling Workers Party, but is unlikely to win the highest office. The dictator's sister, Kim Kyung-Hee, also benefits from the advantages of familial legitimacy. 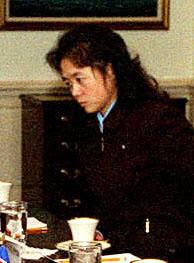 Kim Ok?
In contrast, Mr Kim's "assistant" Kim Ok, 44, thinks that Jong-nam is too close to her in age for comfort and would prefer a greener candidate, according to North Korea Daily News, a website run by refugees, and Yonhap, the South Korean news agency. They suggest she is pushing the claims of one of Mr Kim's younger sons, either Jong-chol, 27, or Jong-woon, who is just 24, who would be less likely to see her as a threat.

And so it goes on.... It all sounds utterly fascinating. I have no idea if DPRK watchers have added two and two and come up with a lot more than four or what will happen to the country when Kim dies. One thing is for certain its people deserve better than what they have now
Posted by jams o donnell at 8:19 pm

At the dollar store last week I spied a buttload of necklaces and pins with the name KIM monogrammed on it.

I'm packing off to North Korea with them to seek my fortune!

Now, know of anywhere that needs some Nancy and Patricia stuff? They had a lot of those too.

The North Koreans concept they call "Juche" which means self reliance, is as Stalinist as a concept can be. It stands for "socialism in one country." North Korea is going in the capitalist direction of China, combined with keeping the Stalinist dictatorship.

a real dynasty! your post is an interesting peek to the Korean political workings.

Juche gives everything to the army and fuck all to teh people doesn't it? Stalinism and and probably teh worst sort of sweat shop Capitalism? I can't imagine a worse fate for teh people of DPRK Ren

Thanks Marites, glad you found it intetresting

Stalinism is the natural progression of Communism. What Ren does is pretend that all evils created by Marx are unrelated to his strain.

Sorry but we have ample historical examples of the lethal consequences of communism. How many people must die before death cultists figure this out 200 mil, 1 bil?

All bad ideas have their appologists. Maybe North Korea can hire Ren to play God and ruin lives
for his inflated ego.

Communism is Neofuedalism with the party elite playing the deluded lords and the rest of us as human cattle. Sorry, but there is a difference between flowery words and reality.

There is also a difference between laborites and insane death cultists.

To be fair to Ren, he does not support the situation in DPRK,and there is already a cadre (a small one of apologists for Kim and his bunch of lunatics