Cricket - It’s as English as Mussels and Chips!

I will happily admit that when it comes to cricket I don’t just fail “dear” Norman Tebbit’s cricket test, I don’t even get close to the exam room. Cricket bores me stiff. What other sport can have five day matches and still produce a draw!

I was therefore amused to see a BBC article about academic research claims cricket is not English, but was imported by immigrants from northern Belgium. A poem thought to have been written in 1533 suggests that the game originates from Flanders.

A cricket
The first definitive references to the game appeared in England in the 1600s, when fines were handed out for those missing church to play. The first cricket club was formed in Hambledon in the 1760s and the world-famous Marylebone Cricket Club (MCC) was founded in 1787.

But German academic Heiner Gillmeister and his Australian colleague, Paul Campbell of the Australian National University. say the discovery proves that cricket is anything but English. The poem, The Image of Ipocrisie, attributed to the English poet John Skelton, refers to Flemish weavers who settled in southern and eastern England.

They are described as "kings of crekettes"; "wickettes" are mentioned too. It is thought the weavers brought the game to England and played it close to where they looked after their sheep, using shepherd's crooks as bats. 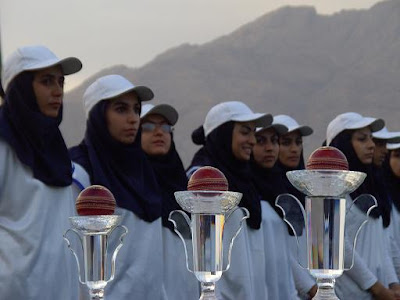 Women cricketers in Iran
Mr Campbell's research was based on earlier investigations by Mr Gillmeister, a linguist from the University of Bonn. "There is no way to relate the term to any existing English word," he told the BBC. "I was brought up with Flemish children and I know the language well. I immediately thought of the Flemish phrase 'met de krik ketsen' which means to 'chase a ball with a curved stick'."

In response, cricket historian David Frith said: "It is hard to deny that this is a breakthrough. This discovery points to an addition to the great history of cricket. It's exciting we haven't yet written the final word on it." He added: "It does make you wonder why Belgium isn't playing test cricket though, doesn't it?"

Well Mr Firth perhaps the reason is because they have better things to do in life (like putting mayo on chips and brewing superb beer) than bother with cricket! Actually there is a Belgian Cricket Federation. Click here for all you need to know about the game in Belgium.

Seriously I don’t really get that worked up about cricket. If people enjoy it then who am I to stop them. It is interesting to see that cricket has reached Iran. In January the Iranian national side beat China by 307 runs. Meanwhile the first women’s tournament took place last October. Click here for more information about the game in Iran
Posted by jams o donnell at 9:40 pm

I don't much care for cricket too. What surprises me more is the mention of cricket in China. They didn't understand/care for rugby when I tried to explain it to them, so I'm surprised cricket made it. Mind you, I don't care for rugby myself either.

Very interesting, Jams, indeed; except of an exorbitant mistake which - according to Article 301 - is severely insulting Turkishness : Belgians are Turks, and thus as everybody swhould know Cricket is as genuine a Turkish invention as Turks are at least 85 percent bicycle.

I can take rugby to a point but I was forced to play the damned game at school. At leat I got to tread on the PE teacher's head Damon!

Wrll that's it Sean I have without doubt insuklted the people fo Turkey. It's a fair cop, slap the darbies on I'll come quietly! It they are angry at me it may proved that they are almost 90% bicycle!

Well, Jams, as you know it's easy and dangerous to insult bicycles. That's why I thought it's wiser to leave it at 85 percent and 15 percent human being. A dangerous mixture, anyway. :)

Point taken Sean. You are right, the 85/15 ration is dangerous enough!

I should think the Belgians have more sense than to play boring cricket! [Mind you, every sport bores me!]

I think you're right there Welshcakes!

Well there is obviously something wrong with you guys. I am from Scotland and I love cricket. Call me wacko, but it holds me in good standing here in Australia.

It must be the Irish in me Colin. Seriously chacun a son gout!