Nudie Cherie Blair painting for sale – a snip at £600k 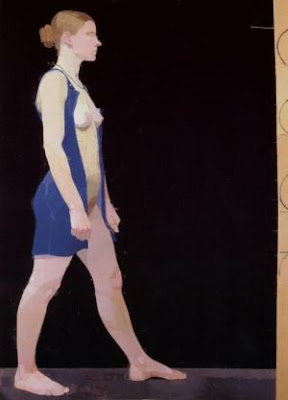 Today’s Independent has an item about a painting if Cherie Blair that was made in 1972 by artists Euan Uglow. The painting, Striding Nude, Blue Dress, is on display at the Mayfair Art Gallery in London, with a price tag of £600,000.

A preliminary sketch is also on show at the Browse & Darby gallery and has been sold for £4,000. The Blairs are speculated to have bought the sketch but the gallery will not confirm: "It's the policy of the gallery that we keep our buyers' names secret. A lot of them don't want their names to be revealed," the gallery owner, Charles Bradstock, said. "Cherie Blair came before the private viewing to see them. She was interested, because she had never seen them before. They brought back memories."

Uglow, who died in 2000 aged 68, was noted for his slow, methodical way of working, which involved taking dozens of measurements of his subjects. He specified that the drawing and painting should not go on public show while Tony Blair was prime minister. Cherie Booth met Uglow through the future lord chancellor Derry Irvine, who was head of the chambers where she and Tony Blair received their barrister training. The Blairs' oldest child is named Euan.

The drawing dates from 1972, when its subject was aged 22. It was made soon after she had graduated from the LSE and depicts a young woman's naked body, although Uglow did not sketch the subject's head. The proof that Cherie Booth was the model is that her name is written alongside the drawing, with what was then her London home telephone number. Uglow used the sketch as the basis for his Striding Nude, Blue Dress. He added a short blue dress to the work that was unfastened all the way down the front and also placed a different model's head on the body.

"The problem was that Cherie was a struggling lawyer at the time and Uglow was a famously slow painter," Mr Bradstock said. "She couldn't spare enough time for him to complete the painting, so he used another model."

There you have it, Cherie Blair is not the only prominent person to have been captured nude though and I don’t mean paparazzi... There are probably nude photos of George Bush senior and Hilary Clinton in the Smithsonian Institute. All freshmen here at Yale and at some of the other colleges and universities involved were required to pose in the nude The pictures at first were taken to study posture. Later they were made by a researcher examining what he believed to be a relationship between body shape and intelligence..

It is not known whether the Bush and Rodham photos ever wound up at the Smithsonian. Needless to say they have never been displayed!

Why would Uglow choose such an ugly motif? It must have something to do with the artist's name and his subconscience, hm?

are the blairs much more popular than the bushes? bill clinton's star has fallen here too. the verdict is still out on hillary but if she screws up on diplomacy- it won't be pretty. we are a pretty angry lot here and while we have stopped short of pitchforks and riding folks out on rails- it's getting close.

that said- i wouldn't want to be subjected to naked photos of any of those folks and i damned sure wouldn't have agreed to pose for any. ah, the rich and stupid.

I know for myself I wouldn't be a subject for a nude painting,, not that any artist would want me as a model!

I wouldn't want a picture of me displayed like that for eternity!

Not a bad figure but I wouldnt get painted nude¬

T least it was not Margaret Thatcher!