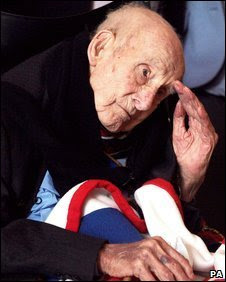 According to the BBC , Henry Allingham, one of the last seven known surviving WWI veterans, has become the oldest ever British man. At 112 years and 296 days (and counting) he has lived longer than Welshman John Evans, who died in 1990 aged 112 years and 295 days.

Mr Allingham spent the day quietly at St Dunstan's care home for blind ex-service personnel near Brighton. Dennis Goodwin, his close friend and founder of the First World War Veterans' Association, said: "He has achieved another milestone in his long life and is raising the bar of longevity. "To be honest the last two years have been littered with milestones but this one is nice for him.

Mr Allingham, is the last founder member of the RAF and the sole survivor of the Battle of Jutland. He is the second oldest living man in the world, and the 15th oldest ever,
Posted by jams o donnell at 12:09 am

I bet there's Henry Allingham posters hanging up on the walls of every single gal at the Senior's Care Facility!

Not sure I would either Sally but it is amazing

At least this is a bit of good news.

It certainly beats the economic nadir we read daily.

Agreed, It is good news Beakerkin

Go for it, Henry!

He's got three years to become the oldest ever military veteran. Here's hoping he makes it

Hope Henry will make it! He seems like a strong one.
Nice to read something GOOD in the news!

And Jams..
I think you will look hot in polka dottie sunglasses ;)
Will you try them?
You might actually like them! :D

It is good news Anna

As for the glasses,I'm more of a black and dark colour person myself.. except work ties!