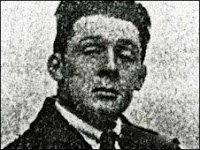 Following on from my previous post, the BBC has another curious story culled from recently declassified files

This story is about Gunner Ralph Dawson, previously an antique dealer, who delighted in Nazi victories and did not want Britain to win the war. However, rather than put him in jail the army sent him to the front in the hope he might expose other fascist sympathisers.

Dawson had joined the British Union of Fascists (BUF) in 1939 when one of his customers turned out to be the group's secretary Lady Pearson. In 1940 he signed up for the army and was stationed in Kent but was soon found distributing far right magazine Action among fellow soldiers.

A Home Office note said: "He told another bombardier that he was a leading member of an organisation whose object was the destruction by revolution of the system at present in force in this country."Dawson also, according to this bombardier, said it would be unfortunate if Britain were to win the war outright."

He was sent to Dunkirk in the hope he might incriminate himself and others but that plan failed and he was later jailed. After the war Dawson travelled around the country performing as an actor using the name Gerald Murrell. The authorities monitored him until as late as 1970.

Given his views I am surprised he even chose to join the army. That said he was not alone. Other former BUF members covered themselves in "glory" during WWII by joining the Britisches Freikorps (BFC), the British SS Unit (not that it was in any way effective as a fighting unit or a propaganda tool), or broadcasting on German radio. One former member (quite a senior member too), John Henry Owen Brown, did show that a leopard can change his spots. He did his utmost to sabotage recruitment for the BFC and was decorated after the war.

JHO "Busty" Brown is an interesting character and his wikipedia entry does not do his story justice (It also leaves out a few warts as well). I must dig out my copy of his wartime memoirs In Durance Vile and a couple of books written by Adrian Weale: Renegades-Hitler's Englishmen (the definitive history of the BFC) and Patriot Traitors (A comparative history of John Amery and Sir Roger Casement). I feel a series of posts coming on... Once I get my finger out and finish off the Red Cushing series