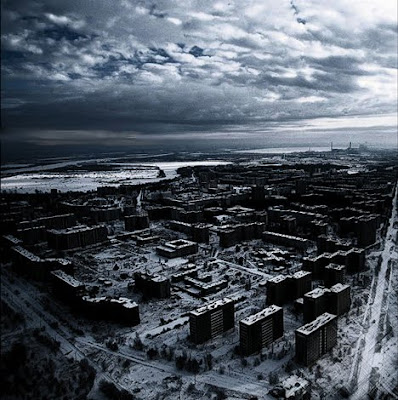 Today’s Guardian reports on the opening up of a new tourist destination that will surely rank up there with Antibes, Mustique and Clacton as the chic place to be seen in summer. From next year the area around the Chernobyl power plant will be officially open to tourists with an interest in post-apocalyptic vistas.

Ukraine's emergency situations ministry said today that visitors would be offered tours inside the 30-mile exclusion zone set up after reactor four at the plant exploded on 26 April 1986.

The disaster killed an unknown number of and forced around 350,000 people to leave their homes forever. While the area remains heavily contaminated, a ministry spokeswoman said, tourism routes had been drawn up which would cover the main sights while steering clear of the dangerous spots.

The itinerary of one such tour, which takes in the nuclear plant and even the remains of the number four reactor, contains elements as lunch (food is delivered from outside of the Chernobyl zone), passage through the Dytyatky control point and measuring of radiation.

Apart from seeing the remnants of one of the late 20th century's most dramatic events, trips to the exclusion zone offer visitors a peek into a macabre, Marie Celeste world where tens of thousands of homes were abandoned. Particularly chilling is Prypyat, once a 50,000-strong city but now a ghost town, where books still sit on school desks and May Day decorations flutter in the streets.

Ukraine's government said that it hoped to complete a new sarcophagus for the exploded reactor by 2015. The existing concrete structure is cracking and leaks radiation.

Well there you have it. I know where I will be going on my hols next summer! Actually I fancy seeing the Antonine wall and the Roman remains on the Gask Ridge… Seriously I have been fascinated by programmes on Prypyat, especially those dealing with the return of wildlife. I am sure a trip to Cherobyl would be amazing
Posted by jams o donnell at 12:38 pm

It would certainly be interesting from a biological succession point of view.

Not for me either Kay!

You are right. The wildlife prog I saw on the area was fascinating

I don't like the idea that we might just be fine after a nuclear holocaust of any kind. I think I'd be avoiding the place for at least another 10k years.

Measuring of radiation is bound to be the most exciting part of the trip.

Oh, and now with your new Nikon, Jams, you will be able to do night scenes of shimmering lights over your body ;-)

Wow Snoopy some of the abstracts I'd get would be amazing!