A dominance other competitors can dream of 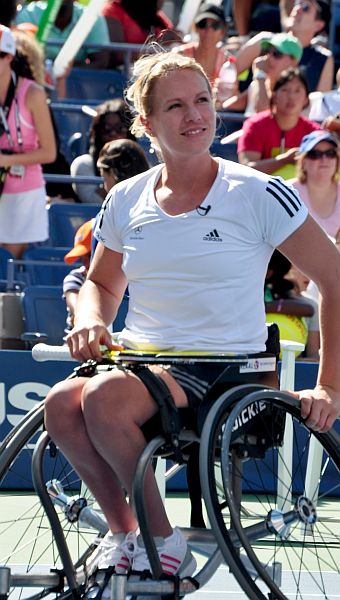 Dutch tennis player Esther Vergeer has just won the women's wheelchair tennis title for the fourth time  thus joining the the small number of olympians and paralympians who have won gold medals at four or more games.

While some events such as swimming  lend themselves to winning large number of medals (see Trishca Zorn with over 30 gold medals from six games) Esther competes in a sport where it is simply not possible to win so many medals ( she has won a total of six golds and one silver the other medals being won in the doubles event, which she is not competing in in 2012)

Outside of the papralympics her dominance is amazing including 42 grand slam titles. What is most astonishing is that she has been undefeated in her last 470 singles matches. That means that she has not lost a match since 2003!

Very few sportsmen and women can come close although Jahangir Khan was undefeated in 555 squash matches between 1981 and 1986. Somehow I get the feling that Esther may ust break that record!
Posted by jams o donnell at 2:23 pm