Our Revels now are ended

I'm not a huge sports fan well when I say that I mean I have no interest in cricket (boring), football (nonimlly I was a West Ham fan but my last interest was killed in the fighting in the game against Millwall in 2009) Formula 1 big american games. Mind you I've always enjoyed athletics (not that I had any talent that way apart from being very modestly fast over 100 to 400m) and cycling since the days of  Sean Kelly, Robert Millar and of course Stephen Roche.

That said the Olympic and Paralympic Games have been a wonderful feasts of sport with particular success for British competitors.  For a little while football mercifully took a back seat whci cn only e a good thing.

Perhaps the best thing was that the naysayers had to shut up. Okay there were a few glitches (the North Korean flag thing) but they were minor. The transport system held up, people came in droves and things generally went very smoothly

Will things change? I would like to think so but it won't be long before refugees are vilified again despite this man's achievements: 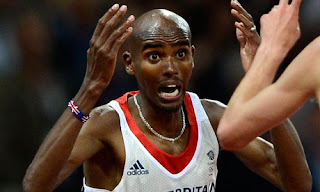 That's Mo Farah if you have already forgotten. It also won't be long before the tabloids are painting  people with disabilities as benefits scroungers again.See my previous post: Leo McKinstry has already started that shit again.

Despite my cynicism I really do  hope that both games inspire a generation.

I agree with you. England is to be praised. It was nicely and safely done. Very few glitches. I'm happy for all the athletes who were able to compete in the sports they work so hard at, so many hours.

I was grateful also for your reports which (for me) clarified the ins and outs, and celebrated countries and winners. It was good to see new countries honoured.

Now for us, Canadians, the hockey season will be under way soon. I wish you could be hired to tell me what's what. It has changed so much since my youth. Not the playing, but the number of teams, and who's who, and which one to keep an eye on and pin my hope.

Ice hockey is not a sport I follow sadly