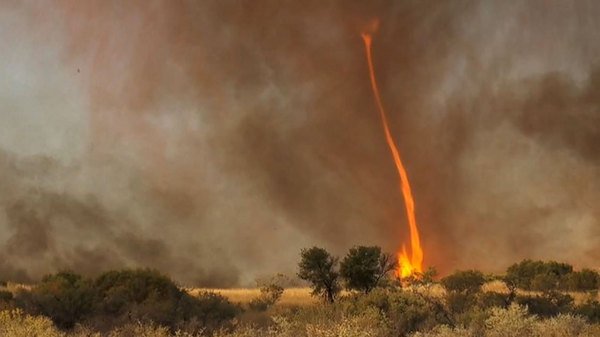 Chris Tangey is a very lucky man as he witnessed a 100-foot-high (30-meter-high) whirlwind of fire tore around a patch of Australian Outback on Tuesday (Sept. 11).

According to a report on Yahoo  filmmaker Tangey captured some very rare footage of the startling phenomenon while out scouting locations near Alice Springs, Australia.

Like the dust devils that spring up on clear, sunny days in the deserts of the Southwest, a fire devil is birthed when a disproportionately hot patch of ground sends up a plume of heated air. But while dust devils find their heat source in the sun, fire devils arise from hot spots in preexisting wildfires.

As the vortex rises and sucks the blaze up with it, its diameter begins to shrink and, like an ice skater pulling in her limbs to gather speed in a spin, its rotation accelerates.

Though humans rarely witness fire devils, they may be more common than we think. Their most likely home, the blazing heart of a raging forest fire, is usually hidden from our view, Because fire devils are filmed even less often than they're seen, not much is known on the range of dimensions and speeds the phenomena can take on.

Perhaps it will advance meteorologial knowledge but for me it's a case of "Wow! Look at that!"
Posted by jams o donnell at 9:31 pm

Holy CRAP. I had never heard of these before!! I'd like to see one for real, from a VERY safe distance!

It's pretty amazing isn't it

Yes it is pretty amazing!

"Wow! Look at that!" seems almost mild for that phenomenon! I've never even heard of such a thing. Best viewed from a VERY safe distance!

Agreed... and shot with a long telephoto lens and the picture heavily cropped!