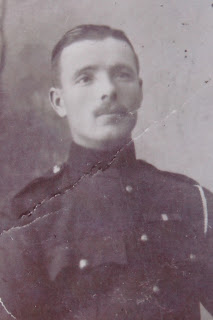 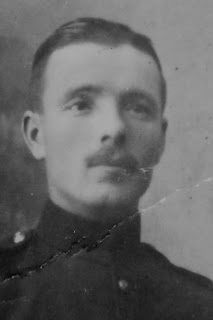 A wordy wordless wednesday this week but here goes:-

This is my paternal grandfather who served in the Second Battalion of the Royal Munster Fusiliers (2nd Munsters) and we believe was taken prisoner at the battle of Mons in 1914. That he survived that terrible conflict is probably down to his spending over four years in a POW camp in Limburg in Germany as a “guest” of the Kaiser! This photograph was taken in 1914.

We have little information n him now. A while ago I searched the WWI service medal database at the UK National Archives website and I was delighted to find a medal record for a private in the Munster Fusiliers bearing the exact same name as my grandfather who arrived in France on 13 August 1914.

This piece of information would place him in the British Expeditionary Force (BEF) at the start of WWI. It is a matter of record that on 23 August 1914 the BEF engaged the German First Army around Mons but the 2nd Munsters were held in reserve and did not participate in that battle.

The 2nd Munsters’ contribution to the Mons Campaign took place on 27 August at Etreux. At the time the BEF was in retreat and in extreme danger of being surrounded and destroyed by advancing German forces. Three companies of the 2nd Munsters under Major Charrier along with a troop of the 15th Hussars, and two guns of the 118th Battery, R.F.A., held off a full German Corps for a day taking appalling casualties in the process. This action allowed General Haig’s I Corps to put twelve miles between itself and the front almost certainly ensuring its survival as a fighting force.

The Action is a tiny footnote in a conflict that took millions of lives but it is a textbook example of the function of a rear guard force. I cannot demonstrate absolutely that my grandfather was actually taken prisoner there and I may never be able to but this must be a prime candidate.
Posted by jams o donnell at 8:39 pm

The World In The Eyes Of Brothers said...

I love old pictures. What a handsome man he was.

Trying to track down this information is tough. Best of luck on it to ya - I've been there.

Remembering the past is important - it helps us know where we're going. kudos to you on your efforts. Happy WW

I love old pictures too, I collect them. This is a fabulous one, and so funny I nearly posted a pic of my grandfather this week!

Personal history lessons are so cool. It is so neat trying to piece things from the past together, albeit very frustrating at times...Thank you for sharing!

How proud you must be for being a grandchild of a hero...

Thanks for visiting my meme blog :)

He was a right good looking man!

I love history - thanks for sharing his story.

Stunning man. And I love the words too!

Alison, that would have been a coincidence. Sadly he died of peritonitis in 1927 when my dad was 18 months old. He has no memory of his as a result. On the other hand he went off in 1941 as a 15 year old with a forged birth certificate and joined the RAF. Irish births certs must have been easy to doctor!

I love old picture too & it's great that you have been able to piece part of your heritage together to go with the picture. Happy WW (PS I bet he had tattoos !)x x x

I love that picture and you are very lucky to have a piece of history like that!

Thanks tegdib. Shaz I imagine he had the full monty - the hunting scene AND the foc disappearing.. err I'll pass on that one!

Very interesting! I love to look at old photos!

remembering is honoring. glad to be part of that here.

What a great story about what your grandfather lived. He was a very handsome man. Thank you for sharing. Happy WW.

Truly a great grandfather. He sure looked really handsome. Good that you were able to do that research on him.

THE SIMPLE TIMES IN LIFE

Thank you for sharing this photo, and telling us a bit about your grandfather. Happy WW!

What an interesting man! Thanks for sharing!

What a handsome, distinguished portrait! How nice to have that much information about an ancestor.
Happy WW.

I am amazed at how much your grandfathers uniform resembles the 1870 US Cavalry attire.

WoW! What a legacy. Awesome story...

Your grandfather was very handsome. I am so glad you have this photo and legacy. What a story. Thanks for sharing and Happy WW.

You should be proud of him. And there's a bit of a history lesson in this post too.

great choice for the week

Thanks all for dropping by. I'm glad you liked the photos

What a great picture.

a treasure to keep! thanks for sharing.

I envy you the ability to track your family history. Well done!

My grandfather was a milk man. He survived the expired cottage cheese battle of 1952. Not quite as exciting and remarkable as your grandfather, jams, but its still part of my colorful family history.

What a cool not so wordless!

Wow, great story to go with the photos ... My grandfather was shot in WWI but thankfully survived and shamed the rest of his village to take up arms in WWII as home guard.

What an interesting bit of genealocal history. Thanks for sharing.

Thanks for visiting everyone

The expired cheese war? I read about it - the chesse curdling war crys, the streets running off white with yoghurt. Terrible, just terrible!

Thanks Aaron. He was lucky to sit out WWI as a POW!

I think this was a very appropriate post with Memorial Day coming up on Monday. Your grandfather was a handsome man and I would imagine that he was quite proud to have done his duty despite the fact that he ended up in prison for as long as he did.

Great picture. I've been looking at lots recently for a family history book.

Everyone else has already said it, but it was my first reaction, jams: what a handsome fellow!

My grandfather was a farmer, and looked pretty typical for an American farmer of his generation. His grandfather was a rather more important farmer in the area, and, as I discovered on my own and to my chagrin, kept slaves. Needless to say, I am not proud of him, and apparently neither was the family, who never mentioned him to me.

My other grandfather built bridges, literally. But he ran out on his family, and I never met him. I am grateful I had good parents and some grandparents to look up to; some of my ancestors certainly had their flaws!

Great photo, and personal history. They built them tough in those days....

O they certainly did Chris! Thanks everyone for their comments.

Steve, I wish I could trace my history back further than that. Perhaps One day I will do some rooting about in Ireland to see what I can find.

As for your gret great grantdfather you cant do much about that. My sister's husband's ancestors were slave holders in Barbados. Not proud but it's not a history that can be unwritten

The answer to this week's WW is up. Go see if your one of the winners!

glad to see this.

Thanks for sharing. As a matter of fact, my wife's granddad experienced a similar fate during the same war, but soldiering in the Russian army. His salvation came through becoming a POW in 1915.

They both had a lucky break Snoopy, no doubt about that. The POW camp in Limbueg may not have been a picnic for my grandfather but far better than some of teh battles this battalion were involved in. He probably would ahve been killed at Loos thye year after or in one of the other engagements where the Munsters was wiped out.