Was the Mormon Manacler unmasked by a Pit bull’s ear? 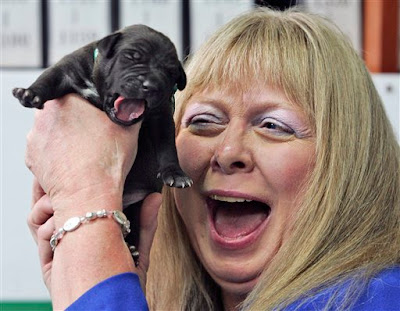 I must admit that news of the first cloning of a pet dog for a paying customer totally passed me by. The Daily Mail along with many other papers reported that RNL Bio, a Seoul cloning company has produced five pit bull puppies from a piece of the original dog’s ear. They are genetic doubles of Booger whose death from cancer two years ago left his owner Bernann McKinney so bereft that she sold her house to raise the £25,000 needed to bring him back to life so to speak.

Miss McKinney, 57, who was described as Californian scriptwriter named the puppies Booger McKinney, Booger Lee, Booger Ra, Booger Hong and Booger Park, after herself and the South Korean scientists behind their birth.

Ms McKinney, also described as a former beauty queen, said Booger became an indispensable part of her life after intervening in the mastiff attack which led to one of her hands being amputated. When she was left wheelchair-bound following reconstructive surgery, the pit bull became her hands and legs, fetching clothes from the dryer and drinks from the fridge, opening doors and taking off her shoes, she said.

McKinney? 57 years old? Former beauty queen? It did not take long for a notorious case from the seventies to be dusted off... 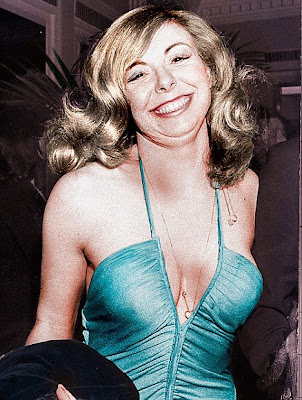 Again the Mail , along with many other papers gives the Manacled Mormon back story

Joyce McKinney was born in North Carolina, in 1949 and first made the headlines in 1972 when she was crowned Miss Wyoming, She subsequently enrolled as a drama student at Brigham Young University, in Utah and it was there that she met 19-year-old Kirk Anderson, a 6ft 4in fellow drama undergraduate, some seven years her junior. There was a brief fling but Anderson, a devout Mormon, apparently sought advice from his bishop, who told him to sever ties with McKinney and move away from Utah. McKinney was not prepared to be spurned so easily. Using private detectives she traced him to Ewell in Surrey, where he was living as a door-to-door Mormon missionary.

In the summer of 1977, McKinney flew to England with an architect friend called Keith May. Armed with an imitation revolver, May confronted 21-year-old Anderson on the steps of Ewell's Church of the Latter Day Saints, and drove some 200 miles to Okehampton in Devon, where his kidnappers had hired a 17th-century 'honeymoon' cottage. May chained the prisoner to a bed. For two days, McKinney tried to persuade the missionary to marry her and father her children. She even read Scriptures with him in bed.

When this failed to melt his opposition, McKinney reverted to Plan B. This involved slipping into a 'see-through nightie', playing a cassette of 'romantic music', having Anderson 'spread- eagled' and sexually stimulating him. She claimed this was a bondage 'game' played with his full consent. He later told a court: 'I couldn't move. She grabbed the top of my pyjamas and tore them from my body until I was naked. 'I didn't wish it to happen. I was extremely depressed and upset after being forced to have sex.'

Fearing he would be kept prisoner for weeks Anderson promised to marry her. But after she loosened his chains, he escaped and went straight to the police. McKinney and May were arrested three days later and charged with false imprisonment and possessing an imitation firearm.

McKinney spent three months on remand in Holloway Prison before being released on bail on grounds of her failing mental health. McKinney and May and the pair fled to Canada, using false passports and disguised as deaf-mute mime artistes.

McKinney resurfaced in 1984, when she was arrested near Salt Lake City Airport, where Kirk Anderson was working. In her car, police found a length of rope and a pair of handcuffs. The implication was clear that she was about to make a second kidnap attempt, but she failed to show up in court and the case was dropped.

By the late Nineties, McKinney was back in North Carolina, dogged by ill health and often in a wheelchair, living on benefits in a remote smallholding with only three ponies and a fiercely devoted pitbull called Hamburger for company. Anderson meanwhile is an estate agent in Utah and understandably reluctant to rake over his past misfortunes.

What, then, of 'Bernann McKinney' who has had her pitbull Booger cloned and claims to be a Hollywood scriptwriter and university lecturer?

Joyce will be celebrating her 59th birthday this week, while Bernann claims to be two years younger. It is a fact, though, that former beauty queens (and even less celebrated mortals) often reduce their ages later in life.

Both Joyce and Bernann use wheelchairs, while the latter's late pitbull Booger sounds very similar in name to Joyce's faithful Hamburger. There is no record of a Bernann McKinney living in Los Angeles, nor does anyone of that name belong to the Screenwriters' Guild.

No university drama department we contacted has heard of any such teacher. It is an undisputable fact, however, that Joyce was once a drama student. But perhaps the most persuasive circumstantial evidence to suggest that Joyce and Bernann are the same woman is that a Joyce Bernann McKinney is registered as living in Avery County, North Carolina - birthplace of the Mormon sex slave kidnapper.

To be honest it looks like the two newsworthy McKinneys are one and the same person. The press, both tabloid and broadsheet, had a field day with the Manacled Mormon case back in the seventies and is having a field day again. McKinney was a very disturbed woman but for a while she briefly the biggest news story in Britain.

I read the cloning story with great interest. Who would have thought it could turn out like this.

There are NYC residents who would have paid good money for that treatment. Why commit a crime when you can be well compensated for this behavior.

What a turn up for the books. With a backstory like that you would think she'd keep under the radar.

I would have kept schtum too jmb but she is unhinged...

Very true beakerkin. On the other hand this was a case of an unhinged woman's obsession. A lot of men would not consider Anderson's treatment a punishment but he certainly saw things differently.

It is one of those stories. In one way sort of amusing but in reality a sordid tale of a woman who priobably needed psychiatric help

I remember the story well. Yes she seems unhinged and the top picture is quite scary!

A roo loose in the top paddock I think.

She is a scary woman Cherie!

I wouldn't pay a penny to have our cats cloned as much as we love them. THey would not be the same animals

Hi
I am doing research on this fake cloning Booger story. Ms McKinney is
a serial liar. she lied about being a screen writer, she lied about
teaching drama “at several US colleges, she lied at first about being
the Mormon rapist, and did you know she did not have to pay full
150,0o0 USD fee, reduced to just 50,000 for her, because she HELPED
OUT with publicity, according to the lab. read between the lines,
those dogs were not cloned from booger’s dna, they are just normal
puppies, cute as hell, but we been had by a serial liar. i am looking
into this. it’s funny, and sad. WATCH THIS STORY IMPLODE…..


RNL Bio charges up to $150,000 for dog cloning but will receive just a
third of that sum from McKinney because she is the first customer and
helped with publicity, said company head Ra Jeong-chan.


this story from Korea was in JUNE, notice the first sentence qualifier
in the photo “CLAIMED TO BE” CLONED DOGS

Three claimed-to-be clones of a family dog Missy, produced in between
December 2007 and April 2008 by Hwang Woo-suk.

Lots of boogers for one story. Interesting, though. Could this Joyce character be cloned? For scientific purposes only, mind you.

This is SUCH a strange story - you'd think it was a plot line for a comic novel!

It wouldn't surprise me if this all unravelled Dan

I can't see the need to clone boogers when the nose produces them day in day out!

In deed free man. You couldn't make it up!