Ayatollah Khatami - what a charming fellow 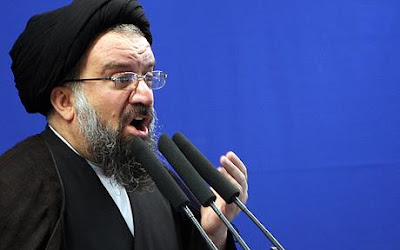 Iranian religious leader Ayatollah Ahmad Khatami (not the erstwhile president of Iran)has called for the execution of "rioters" who have led a series of anti-government protests following the rigged presidential election.

Khatami, a member of Iran's Assembly of Experts, told worshippers during a sermon at Tehran University todaythat Iran's judiciary should charge such rioters as "mohareb", or one who wages war against God. "Anybody who fights against the Islamic system or the leader of Islamic society, fight him until complete destruction," Khatami said in the nationally broadcast sermon at Tehran University. We ask that the judiciary confront the leaders of the protests, leaders of the violations, and those who are supported by the United States and Israel strongly, and without mercy to provide a lesson for all."

The penalty for people convicted as mohareb is death.

It would be nice to think that his reward in paradise will be a syphilitic harpy
Posted by jams o donnell at 8:50 pm

I was going to post this. Glad you did. What a truly evil man. What an evil regime.

I am not religious Jams, because God did NOT create religion. Man created religion ... And stupid men at that!

Ardent, what does that have to do with this man being a bastard? A bastard is a bastard whatever his philosophy. The Sharia regimes are particularly offensive but so is North Korea. So were the Nazis and Stalin's Russia.

James you are absolutely correct. Thank you for the clarification. :)

Agreed, a bastard is a bastard, religious or otherwise!

I am an atheist (ex catholiv) the best I can say of many religions is that the word of God is perverted, not by Man but by men

Such dogs they are, truly. :-p

Assembly of Experts - it's not for nothing they are called that way. "Until complete destruction" - no more and no less.

I hope to see the misogynistic scumbags swept awy. I really hope so