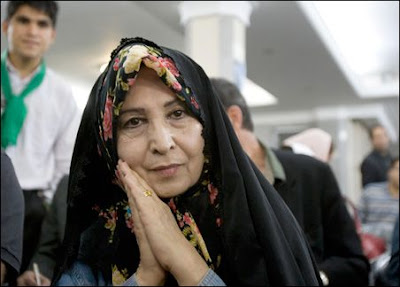 According to the Independent There were fears last night that Zahra Rahnavard, the wife of Iran's opposition leader Mirhossein Mousavi, had been arrested after a defiant statement that protesters should not buckle despite being in a situation she likened to martial law.

Zahra Rahnavard criticised the presence of armed forces in the street and insisted that the opposition had a constitutional right to hold demonstrations. The regime should not suppress it "as if martial law had been imposed", she said.

In the message posted on her husband's website, she also demanded the immediate release of people detained since the election. But before the day was out, there were reports that she herself had been detained.

When they start killing their own it's time for them to go.

It looks like it's Iran and not Ireland that is the sow that eats her farrow!