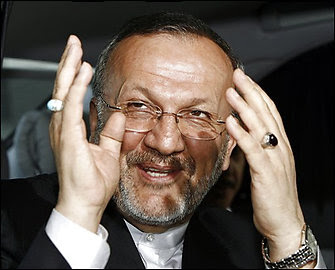 A Tehran Times article called The sun has set on the British Empire, so stop interfering Iran’s Foreign Minister Manouchehr Mottaki accused the United Kingdom of a list of infamous acts against the paradise that is the Islamic Republic of Iran.

According to Mr Mottali Britain sent secret service into Iran, not in ones, twos or even fours, but in “droves” - “We witnessed an influx of people (from Britain) before the election. Elements linked to the British secret service were flying in in droves,”.

He called on Britain to stop interfering in Iran’s internal affairs, saying its officials must realize that the expression “the sun never sets on the British Empire is no longer true.” (well golly gee willakers, and there we were thinking that a quarter of the world was still painted pink!)

Mottaki then went on to denounce certain Western governments and Western media outlets for their hasty reactions toward Iran’s presidential election and asked them to revise their attitude toward events in Iran.

Starting with France he accused the nation of having to put up with political lightweights who are “auctioning off” the French Revolution’s achievements” (I know it was a mistake to sell off that guillotine!)


Meanwhile Germany’s leaders are hostage to the Zionists’ terrorist policies, saying their country has been implementing policies in tandem with Tel Aviv. As a result it is in “no position to express views on Iran’s transparent election”, he added.

Methinks Mottaki has been listening too hard to the Wit and Wisdom of Comical Ali. In one sense it is amusing to see that Britain remains Iran’s default bogeyman even though our influence is much reduced. But then again at is perhaps no surprise - Britain’s (usually detrimental) interference in Persian/Iranian affairs over the years are a matter of record

"Uncle Napoleon" is a reference to Iraj Pezeskhad’s wonderful comic novel My Uncle Napoleon. The Uncle Napoleon of the title, was a blustery former army officer who genuinely believed he was involved in battles against the British Empire in his youth and that the British (the book is set in WWII when Iran was under British/Soviet occupation) are out to get him.

The novel is so popular in Iran (and should be popular anywhere people can read) that the expression Uncle Napoleon is used as shorthand for those people in Iran who believe that foreigners are the cause of all of their country’s woes.

I'm afraid it's very human to want to blame problems on someone else. If the current Iranian government really thinks that, it makes the Ayatolla (spelling!) sound less Divinely inspired. Hmmm. I wonder if he's thought of that.

Welcome to your new found status as the "Greater Satan" [I assume the US is still the "Great Satan"].

I wonder if anyone will ask at question time where the government came up with the money for all of these agents in Iran.

The Canadians are livid ... well, OK, really annoyed, Canadians don't get too carried away with anything that doesn't involve hockey ... at being listed as the "Not Quite Great Satan".

Is Iranian security so feeble that every other government on the planet can ship in agents? Do they have any idea how few people in the West speak Farsi?

The current Iranian government is beginning to sound a lot like the late and unlamented Bush administration.

It is undeed RG, It is far easier to do that than face the reality.

Bryan Britain was Iran's bogeyman long before the US ever was. It just looks like we have regained thee top sport again!