Henry Allingham now the oldest man in the world 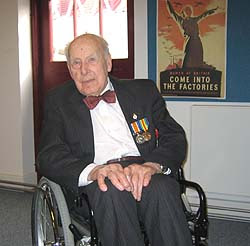 Following the death of death of Tomoji Tanabe in Japan WWI veteran Henry Allingham (113) has officially been proclaimed the oldest man alive by Guinness World Records.

I'll be raising a glass to this wonderful old man!

Yep. Another consideration will be that the old Jewish "till 120" seems to be a bit restrictive in this case ;-)

I read it in the news in Norway as well.
Impressive age.

Amazing to think he's not only made it through WWI but everything else thrown at him since!

He looks in pretty good shape, if this is a recent photo.

My mother in law lived until one month shy of her 105th birthday but the last two years were miserable for her unfortunately. But best wishes for this gentleman as long as he is enjoying life.

I hope so Snoopy!

It is Tor, definitely that!

It is amazing indeed YTSL

I think this one is a couple of eyars old. He is very frail of course but he was still attending the odd WWI event even last year