For me, one of the most impressive aspects of the alien in the "Alien" films was that it had two sets of jaws, movie series. Now it seems that this feature is not confined to science fiction: at least one specie of moray eel (an eel that lurks in reef crannies and reaches up to three metres (10 feet) in length) that has a second set of jaws from deep within its throat which it uses to seize prey. The animal kingdom has many mechanisms for ensuring that a meal does not escape: snakes unhinge their jaws, while most fish use suction to draw in their victims. Scientists at the University of California at Davis discovered the presence of what they call the "raptorial pharyngeal jaw" - a mobile inner jaw lined with razor-edged, hook-like teeth. 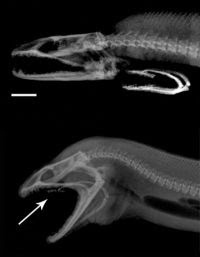 Situated in the pharynx, it can thrust forward at lightning speed into the mouth, virtually eliminating any chance a prey might have had of squirming free from the first set of jaws. It was discovered after previous research had shown that some eel species do not use suction during feeding. Marine biologists Rita Metha and Peter Wainwright wondered whether the same was true of the moray eel. To find out, they recorded high-speed videos of Muraena retifera, feeding in a laboratory aquarium. That's when then discovered the inner jaw, which is clearly visible in the film. To get an inside view of the mechanism, the researchers did a X-ray fluoroscopic analysis which gave the first detailed view of the eel's hidden dental apparatus in action. Almost as remarkable as the lunging jaw is that fact that it went unnoticed for so long.

File this one under WOW!
Posted by jams o donnell at 1:28 pm

Who's going to break the news to Sigourney Weaver?

I don't think she'll be going scuba diving! I wonder, though Alien vs Moray Eel? There's a thought for a film!

I wonder if Ma and Pa Eel remark on the birth of a new baby, "Great, another TWO mouths to feed!"