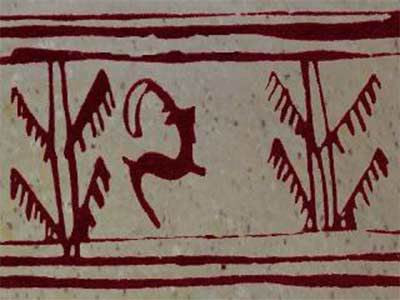 The Fortean Times is a fount of knowledge on the unexplained, the odd, the downright bizarre and ths plain old simply fascinating. The new issue arrived next week and it carried an item about this discovery as reported in Animation Magazine: Animation has long been considered a modern invention (the magic lantern dates back to the 17th century; the zoetrope is a 19th century invention). However this does not seem to be the case. A 5,200-year-old bowl found in Iran’s Burnt City in the 1970s features a series of five images that researchers have only recently identified as being sequential, much like those in a zoetrope. Spin the bowl and you would see a goat leaping to snatch leaves from a tree.

The pottery was unearthed from a burial site by Italian archaeologists, who hadn’t noticed the special relationship between the images that adorned the circumference. That discovery was made years later by Iranian archaeologist Dr. Mansur Sadjadi, who was later hired to direct the excavation of The Burnt City, located 57 kilometers from the city of Zabol in the southeastern Iranian province of Sistan-Baluchestan.

While no one questions the early instance of animation, researchers have been at odds over the significance of the earthenware bowl’s artwork. It was originally thought to depict the goat eating from the Assyrian Tree of Life, but archaeologists now assert that it predates the Assyrian civilization by a thousand years.

Go to the Animation Magazine article to see a video clip.I don’t know about anyone else but this is the sort of stuff that fascinates me.

Luckily I have you to find all this interesting stuff for me Jams, for it fascinates me too. Now I'll go look at the video. I dare not go off in the middle because I get sidetracked and never come back to finish.

Ah, the butterfly mind, with which I am equipped.

I love this sort of thing jmb

That's truly amazing. Makes you wonder if we are discovering or re-discovering things.

Unreal, I hope Lordsomber sees this, I find it extremely interesting, thank you Jams.

I was utterly amazed when I saw this. I think he did. He visited yesterday.

Glad you found it interesting Cherie

And have you seen the early preholithic Fritz the Cat sequencing? Just how far back does all this go?

A long way by looks of it James. It's amazing what is discovered or invented then lost again only to be reinvented.