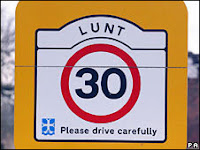 Residents living in a graffiti-plagued village on Merseyside are being asked to consider changing its name to tackle religious vandals who alter signs in the village.

Lunt, which dates back to Medieval times, has been repeatedly targeted by churchgoers who change the "u" to an "e". One suggestion is to change it to Launt. However, some villagers are defiant at the thought of giving in to the vandals.

One unnamed agnostic said: "This village is very, very old and people don't want the name changed. "The vandalism has been done for years, it's not children who are doing it. Personally, I suspect the vicar. At the end of the day we live in Lunt and we don't want to forgo sweets or swearing all year.”

And I believed you too!

I am so naive, I did not even see the real possibility until I got to the end.

It seems like you struggle with the same important matters as they have in small places in Norway.
I understand why people go to war against each others.
For the most simple matters.

Clearly, the signs are being changed by John McCain, as a gesture to his wife.

You NUT! That was funny.

Just wait till tha alcoholics change it to Pint.

Thanks everyone I couldn't resist amending this news story.

Steve. McCain certainly does seem to have a fiery side.

Don't mind if I do Beakerkin!

When will the British learn not only to pronounce, but to spell the philosopher's name correctly, i.e. Kant?
Perhaps changing the place name into 'Devil's Kitchen' would do? :)

They did actually get to the point of holding a referendum to change the village's name to "Wagina" but there was a massive demonstration and plans were abandoned.

There were rumours that the demonstrations were orchestrated and stuffed with a rent-a-mob all bankrolled behind the scenes by a consortium of professional Limerick writers.

Personally I find that unlikely. The intensity of the many long-standing feuds within the Limerick-writing community make it unlikely they could ever act together even for the benefit of all of them.

Its a funny old world innit?

There once was a man called Blunt
Who lived in the village of Lunt
Once, for a bet
He dressed up like a vet
And everyone called him to get their cat neutered

Haha Sean. I wonder if people would call each other Kants instead. The Devil's Kitchen? I have never known his to use even a blast, let alone stronger profanity!!!

Haha Skuds, good one. The limerick writers are a rum bunch of coves, but you are right, it is like herding cats to get them to act in concert!