Give your loved one Roadkill 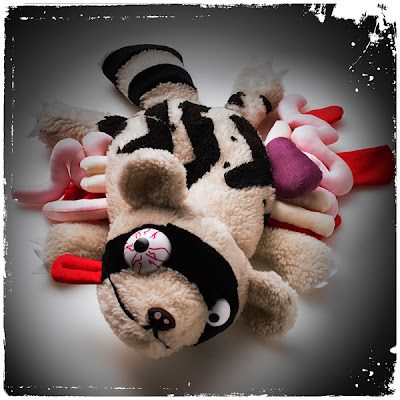 You’ve bought them Giant Microbes and a My Little Cthulhu with extra victims so what do you get the ghoul in your life that has everything?

Toy makers Compost Creations have just the thing for your loved one with dubious tastes: Roadkill toys! Twitch the raccoon is the first of a whole menagerie or flattened furry friends: He comes in his own body bag and toe tag. All you need to to get the full roadkill effect is to open zips on his side and let the gore pour out!

Toy creator Adam Arber, 33, from London, said: 'I got the idea from looking at my mother-in-law's dog which is quite ugly and I thought it would make a great toy. A friend of mine had taken some pictures of road kill and the two things gelled into one idea.' He said he thought the toy, which costs £25, would appeal to people with a sense of humour and 'probably not anyone easily upset'.

Twitch will be joined shortly by Grind the Rabbit, Splodge the Hedgehog (who will also be available as a mouse mat sorry, mouse splat!). Pop the Weasel (a doorstop), Fender Fox (a very different sort of nodding dog for the back of your car!) and a door mat called Puddle the Vole. I was thinking of getting the not-wife an Oscar de la Renta chemise for her birthday but I know what she’ll like these more!

The cutting edge of toyology.

What a very unusual idea!

Look up Earl the Cat in google. I named my cat after Earl the Dead cat because he was the same color. Unlike the toy my cat ate 24/7, just only the heads.

I really really want one, I love the entrail spillage

Different, don't know if I would buy them, maybe...not sure.

Ah Beakerkin I'd not heard of Earl teh dead cat before!

Haha Tasmaniac, I'm not sure how available they are outside the UK!

THey are not for everyone, Nunyaa, that's for sure

Having picked up a few dead animals from the road, that is more than enough. Definitely an adult toy.

Very true Colin, I can't imagine many parents buying one for their toddler!