WW - Inside a bunker 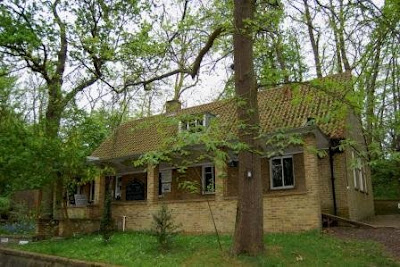 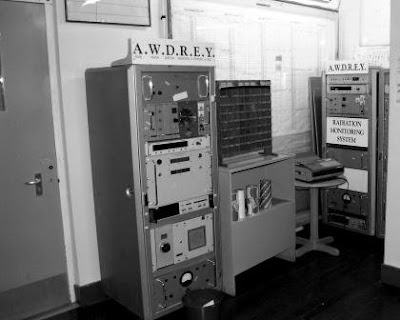 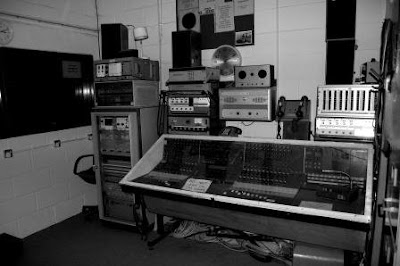 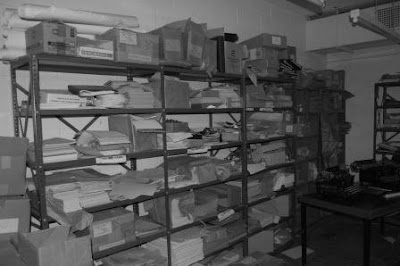 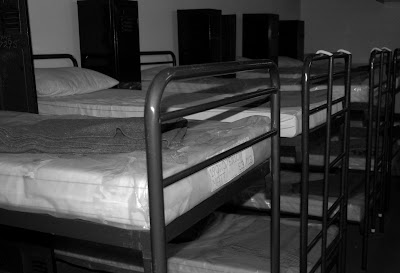 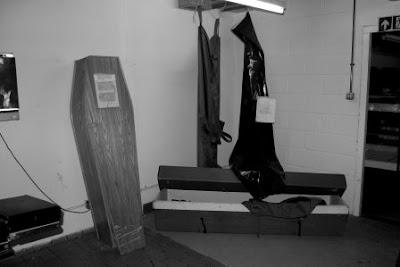 A few miles away from where I live, is a small and unassuming building which hides a big secret: it's the entrance to a Cold War era nuclear bunker.. Until the early 1990s it woukld have been a regional seat of Government if the UK had faced a nuclear attack. Several hundred officials would have been housed here, their function to administer part of a shattered country.

The bunker is now open to the public asnd advertised with signs saying "This way to the Secret Bunker". This week's entry for the Tuesday and Wednesday edition of Wordless Wednesday.
Posted by jams o donnell at 7:42 am

Sounds like a cool signage "This way to the Secret Bunker".

The place has got a faint sense of eeriness to it which I can't explain.
That's a coffin right on the last picture?

The secret is out! How come there's a coffin in the last picture?

Yup, I was wondering with the coffin:) Interesting photos!

That's fascinating! So there was really a threat of a nuclear war in the 90s. I wonder how developing countries like Philippines and Cambodia prepare for an event like this and what would it be like? And yes, I saw a coffin, too.

It’s nice to know that they decorated the place with a coffin! Just a friendly reminder to all the living politicians that most of their constituents are almost surely dead.

"This way to the secret bunker" is pretty darn funny now. How times change! What a surprise to see what's in there.

woah cool, what a discovery...but it a bit chilling to see coffin in the last photo as per eastcoastlife had said!

They should have positioned it on an incline so it could have been dubbed Bunker Hill.

Houston is under sea level and we can't build basements here. Otherwise, I wouldn't mind having an Infidel family bunker stocked with cans of Spam and Beefaroni as far as the eye can see.

Wow...that is so cool. And it looks absolutely beautiful there!! Happy WW.

What an interesting time it was when all these types of things were built. It wasn't easy being Russian immigrants during that time in history.

That's very interesting. The last shot is quite intriguing because of that coffin (if I'm not mistaken).

So do they think that nuclear war is no longer a threat? Or have they moved up-market?

I also menat to say that it looks fascinating and I'd like to see around it. A secret bunker with directions to it sounds just wonderfully British!

Just the word bunker gives me chills. I get it confused with dungeon and jails.

Neat piece of history! Is that really a coffin?

That is really cool. Great pictures.

There is one a short drive from where I live too! They are fascinating and will worth a visit.

Thanks for visiting. Yes that is a coffin in the last shot. The expectation was that people would die down there. Some would probably commit suicide

Eerie and fasinating all at the same time. Actually it also reminds me of Desmonds place on Lost lol.
Happy WW

nice photos. her also in the rockies mnts is also a little secert. cheyenne mt base is also from the cold war but is still in use. great photos!

woa, that is like totally cool ! I used to really dislike History, but now its totally fascinating especially when we can see and feel, smell and taste the air like this. Thanks for sharing!

That's a bunker? Wow, I always had them in my head as underground, or at least partially. This is just way too cool. Oh so very interesting. But of course, you never cease to have GREAT entries.

I have never got round to visiting, but I did take a photo of one of the signs while the Mrs was driving past at speed...

Well, I suppose that now, the secret is out it will no longer be used?!?!?!

Would love to visit it one day, where is it located?

Ours is up as well at burntofferings.

Have a great WW!!

A little eerie but I should say it's some bunker.

wow - i've never been inside one. do they still keep it stocked with canned goods as it would've been in real use?

What a cool WW!

That photo of the rows of bunk beds is my favorite of the photos, but they're all amazing. Yes, an eerie quality runs thoughout, but there's also a sense of purpose to everything. Including the bodybags and the coffin!

Great job with the photos Jam's and interesting info! Good WW to you!!

Wow, how interesting. Loved the photos.

really interesting! it includes a coffin, too? :)
happy WW!

Awsome photos...wait, did I see a coffin?

Someone spilled the beans, it isn't a secret anymore!
I didn't see any doggie beds in there for man's best friends.
Happy WW&WT! Thanks for the walk along with us this morning.
..

Wow and the outside is such a disparity w/ the inside --it is so peaceful-- is this April Fools?

Wow that is so cool then, those stuff inside must be very old yet some of them i guess are still working. Happy WW!
Oh by the way i just got back from one month away of participating the WW so these are my entries now.
A Dozen Pupppies
Beautiful Sunset

Much nicer looking construction than the bunkers I have seen in Germany...
Interesting post and pictures! Happy ww!

That's an amazing series of pictures.

This is fascinating, Jams! The fact is, when there is such a war, this bunker would only provide temporary assistance... Also, kind of reminds me of the Cabinet War Rooms I went to last year-only of a different era. But, I did not see any coffins there... :0

Very interesting Jams. I hope you don't mind that I've included you in my blogroll. Thanks for commenting on my blog. Sorry if it was only now that I was able to return the favor since I wasn't feeling very well due to my pregnancy during the past week.

jams, I assume it won't be the bunker if there is a nuclear attack now - where is the new bunker? Such an innocent looking building hiding a terrible secret. :)

Interesting 'stuff', Jams. Sorry I am a bit late. In case you did not hear about and are interested: Here is a link to the " German government's 'secret' (anti-) nuclear bunker“ , tiny parts of which have recently become a museum. What is not being mentioned in the article: the millions and millions of tax-payers money being annually pumped into the 'spartanic' (ho ho ho) maintenance.

Ah, and Happy second Birthday, Jams. Good to have you. :)

Very interesting! Thanks for the info.

Thank you for letting the secret out. The coffin looks creepy though.

I guess it's not a secret anymore! It looks so cold.

I came over from Elastic's site. Love your comments there.

And the secret is out!

Wow, thats a great and very interesting entry for WW!

Have a good one!

What a hidden story, kept Wordless from media.
Amazing.

Having grown up during the 'cold war' era, I have always been fascinated with bunkers. This is so interesting. So glad you shared.

Thanks everyone. Glad you enjoyed the photos

That looks soo cool place. I would want to come and see that one of this day.

I love your posts like this post. The photos are great, the information is so good. These "bunkers" were so scary to me back then. And so worthless. But we all thought they would save us.