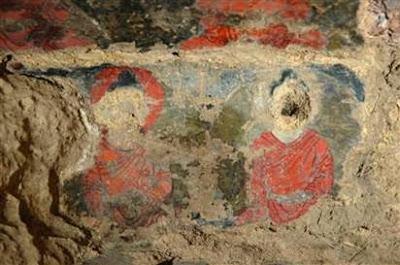 French-based scientists have been investigating paintings at the cave complex at Bamiyan, site, until 2001 when the Taleban government destroyed them for being un-Islamic, of two vast 6th-Century Buddhas.

A team from the European Synchrotron Radiation Facility in Grenoble has painstakingly analysed the ancient paintings in those caves. They say that in 12 caves 7th-Century wall-paintings were created using oil paint, derived possibly from walnuts or the poppies which grew in the area. It is believed oil painting in Europe began only some six centuries after this. The findings suggest these may be the oldest known examples anywhere of painting with oil.

The wall-paintings were devotional art showing the Buddha, often in colourful robes. Probably the work was carried out by itinerant artists travelling the Silk Road, the ancient trade route between China and the West.

There are plans to reconstitute the Bamiyan Buddhas but this will be a difficult undertaking – and a low priority undertaking given the state of Afghanistan. It will be a no priority if the Taleban are victorious again

Along with the destruction of 5th century Buddha statues and other important relics by the Taliban they've proven that they're not only heathens but uncultured heathens as well.

I think vicious misogynistic scum is a better description EWBL!

Be a shame if all this is forgotten about and destroyed.

Very sad whatever is happening there and I fully understand your concern.

I visited Ajanta and Ellora caves Dec'07. If u r interested take a look at my posts.

Wow those are amazing photos Indrani. Thanks for sharing

I stayed in Bamiyan for a couple of months in 2007, living just across the famous cliffs. Having visited the Buddha caves, sad to say, much of the paintings have been reduced to soot-laced remnants. I am just wondering, what conservation efforts are in the pipeline to salvage as much of these valuable arts as possible? I believe its a race against time, but one that may not get much priority, due to the situation in Afghanistan now.

THanks for posting John. I hope a way can be found to save what's left. I know Afghanistan has so many problems but it would be a shame if this was lost.