Nick Griffin and his rabble have chosen "Battle for Britain" as its European Election slogan. The election poster shows a nice picture of a Spitfire.

All nostalgic stuff , designed to link the BNP to the RAF’s finest hour – But RAF history experts have identified the iconic plane used as belonging 303 “Kościuszko” Squadron, one of a number of RAF squadrons flown by Polish pilots. 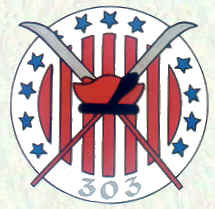 BNP party chiefs defended their use of the image and insisted they knew all about the background (Pah and I fathered every Sugababe). However, John Hemming, MP for Yardley, Birmingham, noted: "The BNP... have a policy to send Polish people back to Poland – yet they are fronting their latest campaign using this plane.... It's obvious they just picked an image at random and they are really clutching at straws if they say this was deliberate." 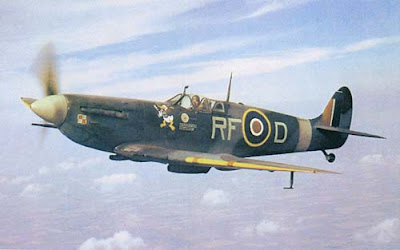 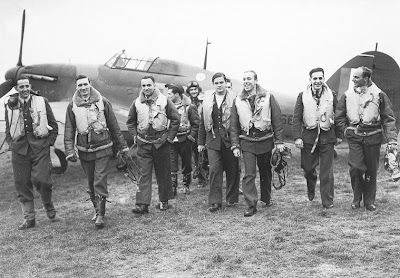 303 sqn pilots - I suppose Darby would have been against these guys too
I’m sure that the BNP would have opposed the employment of the likes of Zdzisław Krasnodębski and Witold Urbanowicz (who commanded 303Sqn during the Battle of Britain) – I’m sure they were undercutting local workers too.

Oh and here’s another Eastern European worker who I am sure the BNP would love to deport too. He can be found in the War Grave at Hornchurch Cemetery, hear St Andrew’s Church 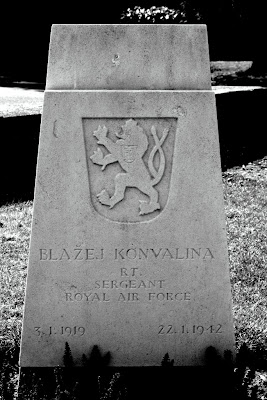 Flight Sergeant Konvalina was based at RAF Hornchurch at the time of his death. He served with 313Sqn which was one of four Czech squadrons within the RAF during WWII.

303 Sqn was just one of a number of Polish squadrons serving in the RAF during WWII. The other squadrons were:

Click here for brief histories. Wikipedia has more detailed information on each of these squadrons, It goes without saying that their squadron badges take pride of place on the floor of RAF St Clement Danes
Posted by jams o donnell at 4:10 pm

He he. You got them, Jams, although your denial of fatherhood of these sugababes... I don't really know ;-)

With statements like that, it seems they have scored an own goal!

Just shows how good the Polish were.

Not to mention their Enigma work, the Warsaw Uprising, Piorun, etc...

I don't think I could make that claim with any seriousness Snoopy!

Indeed and how sad Cherie!