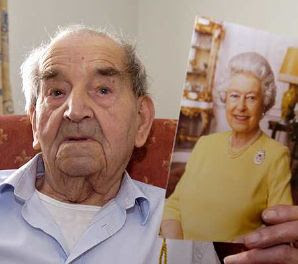 Netherwood (Ned) Hughes who died on 4 April aged 108, was one of the last surviving veterans of WWI. Born in Great Harwood Lancashire, Hughes spent most of his working life as a mechanic and driver and, in June 1918, he was called up, like every other driver in Great Britain, to perform that role in the British Army. He was still in training when the war ended.

What a grand age to live to! Let us never forget the sacrifice Ned Hughes and soldiers all over the world made. I seen a comment on another site, I can't recall which one just at time of writing, but the woman asked why are they still teaching about WW2, and also stated it is of little if any historical significance. I was gob smacked. I for one, hold these veterans in the highest esteem.

I just don't get than woman's attitude, Nunyaa. She is probably a very stupid person

Gads. Are there still people like that? Maybe she believes the moon landing happened in a Hollywood sound stage, too.
~~~~~And may God bless each and everyone of these heroes!
~~~Blessings~~~

I wouldn't be surprised Gracie!

What a wonderful age! Have you read the book by Harry Patch? He is a surviving veteran and his book is so pleasing to read.

I wish I had recorded my Grandfather's tales - a veteran of both wars and he was in Russia during the revolution. What a way to live a teenage life (as he was at that time) but I have a lot of admiration for these old boys and their memories.

I haven't read the bookabout Harry Patch.. the Last Tommy isn't it?

I nevre knew my grandfathers my dad;s father was in the BEF and was taken POW in August 1914. I must continue to record my dad's experiences in WWII before it's too late

Oh, poor old chap. That was a terrible war. I have a friend here whose 19-year-old uncle was killed after 6 days of it.

It was Welshcakes. The carnage on the Isonzo and at Caporetto is forgotten here

I would jsut like to thank you all for your comments about my great, great Uncle Ned.
He was a lovely man the strongest man i have ever seen. God rest his soul.
regards
Adrian Spruce