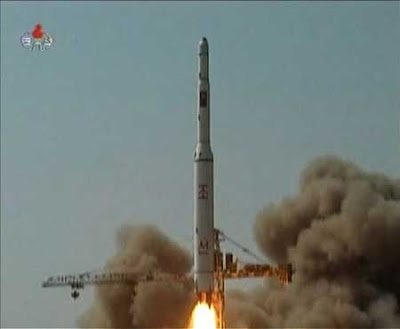 Rocket launch grabbed from N Korean tv by Xinhua
On Monday the Korean Central News Agency (KCNA) reported the successful launch of North Korea’s first satellite Kwangmyongsong-2 (aka Lodestar). According to KCNA the satellite “is sending to the earth the melodies of the immortal revolutionary paeans Song of General Kim Il Sung and Song of General Kim Jong Il”.

The launch was is described as being “symbolic of the leaping advance made in the nation's space science and technology was conducted against the background of the stirring period when a high-pitched drive for bringing about a fresh great revolutionary surge is under way throughout the country to open the gate to a great prosperous and powerful nation without fail by 2012, the centenary of birth of President Kim Il Sung, under the far-reaching plan of General Secretary Kim Jong Il. This is powerfully encouraging the Korean people all out in the general advance

Not surprisingly, the good people of the Korean F**kwit Association exploded in paroxysms of delight: Dermot (sterling fellow) Hudson said “Congratulations to the DPRK on the successful launch.This is the fruit of the independent national economy,self reliance and Juche.It is a gunshot signifiying the building of a great prosperous powerful socialist nation. The US imperialists and great powers who lorded over the world once have been proved useless and impotent LONG LIVE THE DPRK! LONG LIVE JUCHE SCIENCE AND TECHNOLOGY! LONG LIVE THE WPK ! LONG LIVE THE GREAT LEADER COMRADE KIM JONG IL! MANSE MANSE MANSE!

Australian member Yuchen Wank went even further saying “I dreamed this unforgetable moment last night, with some glorious images of Mao and Stalin. With other pictures appeared in my mind, which associates with those bloody capitalist exploritation, opression, injustice and corruption in my own country, I actually cried! But this was a happy cry! Love you, the DPRK!” 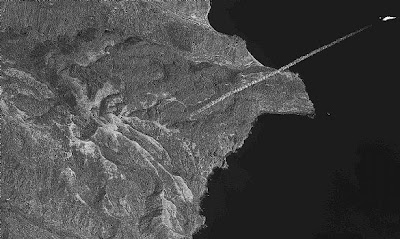 Today’s Times has a an interesting satellite image of the launch which shows smoke from the rocket across the forested hills and the fiery trail of the object.

Contrary to the North Korean media Four of the countries (USA, Russia, South Korea and Japan) monitoring the skies for the signs of the satellite have reported no sign of it, or its music. According to the US military, the rocket failed to separate at the second and third stage. It flew over Japan and ditched in the Pacific after a journey of 2,000 miles.

It depends what North Korea really wanted out of the launch. If it was the vain prestige of becoming the 13th spacefaring nation (joining, in chronological order, the USSR, USA, Canada, France, Australia, Japan, China, the UK, India, Israel, the Ukraine and Iran... oh and the ESA too) then the launch was an utter failure. Or perhaps it was, as suspected, a cover for a ballistic missile test. Whatever the reason it distresses me that North Korea can spend good money on a space programme but can’t afford to employ some decent copy writers for KCNA!
Posted by jams o donnell at 7:22 pm

What me worries:
Everyone that do has money, can build the most by searching on Internet.
What and how to protect from ----
well there is a lot to protect.
Even the free speech.
That's a challenge.

I suspect it was just another instance of taking the long-suffering Korean taxpayers' money to build the ego of their great and glorious leader Kim Jong Il. If people haven't learnt that he's the greatest by constant repetition, here's another way to rub it in.

THat's is a major issue Tor

I dreamed of this unforgetable moment too, with some glorious mental images of Myleene Klass and that fit nurse from Holby City. But enough of those images. Ahem. With other pictures appeared in my mind, which associates with those bloody infernal apocalyptic images like in the film Terminator 2 where Sarah Connor sees doomsday, fire and Armageddon, I actually cried! But this was a sad cry! We're now officially doomed. Fuck you, the DPRK!

I am distressed by this whole situation!

Joking aside it is disturbing LB