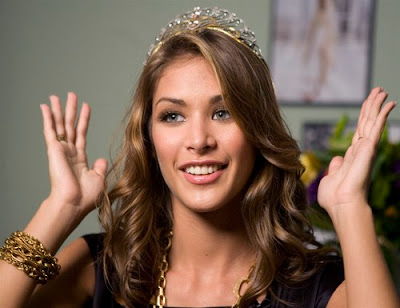 When I saw this in today’s Independent I thought that this must surely be an April Fool’s joke but the BBC says otherwise.

It would seem that Miss Universe, Venezuelan Dayana Mendoza, has been fulsome in her praise for Guantanamo Bay. "I didn't want to leave, it was such a relaxing place, so calm and beautiful," she wrote in her blog at the end of a five-day trip.

Ms Mendoza, a Venezuelan model, was crowned Miss Universe last summer. Since then, she has clocked up stops in Indonesia, Spain, the Bahamas and Puerto Rico. "This week, Guantanamo!!!" she trumpeted on her blog. Her visit to the base was designed as a morale-boosting treat for troops. "The first thing we did was attend a big lunch and then we visited one of the bars they have in the base. We talked about Gitmo and what it was like living there," wrote Ms Mendoza.

Other highlights included meeting the military dogs – who "did a very nice demonstration of their skills" – and a first-hand look at the detainee camps with their orange jump-suited inmates. "We saw the jails, where they shower, how they recreate themselves with movies, classes of art, books," she said. "It was very interesting."

Cori Crider, who has represented more than 40 current and former Guantanamo prisoners, described the visit as the "latest surreal chapter" in the history of the prison. The lawyer had just finished visiting an inmate, who had been shackled to the floor, and was driving back to her office when she saw a large crowd of jostling soldiers. "At the centre of the uniform swarm was a shock of glossy hair and a brightly patterned top that looked more like one you'd wear on beach holiday, her hip was out, her arm around a Marine," said Ms Crider. "It's obviously tempting to blame her for posing for a photo a stone's throw away from the isolation camps, but people don't think. They miss human suffering going on right under their nose."

Miss Mendoza described the sea thus: "The water... is soooo beautiful! We went to the glass beach, and realised the name of it comes from the little pieces of broken glass from hundreds of years ago. It is pretty to see all the colours shining with the sun." Miss Universe's final encounter was with a jewellery maker. "I bought a necklace from her that will remind me of Guantanamo Bay."

Hmm I wonder if some of the longer term visitors will have similar fond memories, but then I doubt any of them had the chance to buy a necklace or visit the glass beach...
Posted by jams o donnell at 2:08 pm

It certainly has a surreal quality!

she probably wrote on her blog what she thought readers would like to read from her as a Miss Universe. The realities of the place she visited probably had been glossed over by her hosts. But i still think it is a little shallow to try to write a politically correct post under such circumstances

I wonder why there would medical scientists still be discussing when one's braindead.

Actually the prisoners in GITMO get better medical care and food than Cubans. They also get unrestricted library access and can worship freely unlike Cubans.

GITMO is preferable to living under Communist tyranny.

I would agree with Beakerkin that there are places in the world a lot worse than Gitmo. That fact doesn't make Miss Universe's report a literary, intellectual, sensitive gem. I guess she never pretended to be all that. Amazing that her handlers (because she's also in a jail, y'know!) think it's appropriate to publish the rubbish she writes. They're the ones that need their head examined...

Beakerkin, Claudia while there are worse actual living conditions elsewhere, the issue of rendition and years without trial is far more serious. Doing that sort of thing makes us little better than our adversaries

Jams, I also read this report in the papers. I was going to post about it but too busy with work.

I once felt that Beauty Queens were given a bad rap; that the media played upon their nervousness and toyed with their incoherent answers to certain questions.

But after reading this report, this lady was not trying to think positive but she is positively stupid.

She creatinly gave the impression of being a stupid airhead doesn't she Ardent!