A U-boat in Ireland

Contrary to rumours there were no secret U boat bases in Eire during World War II. The chances of one staying secret were virtually nil. Besides if there had been any evidence of one, the resultant British action would have been swift and drastic I am sure. That is not to say that U boats were not present in Irish waters. In one case a U Boat did actually land in Eire in rather unusual circumstances. 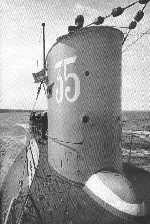 On 4 October 1939, the residents of Ballymore near Dingle noticed a strange craft heading for the rock at Ventry Harbour. They rushed towards the shore and to their amazement found that members of the crew of the German submarine, U 35, were landing two Greek sailors from a rubber dinghy.. After landing the men, the German sailors rowed back to the U Boat and brought in two more men, and they continued to make the trip until 28 men were put ashore. They were survivors from a Greek freighter, Diamantis, which had been bound from Freetown to Barrow on Furness with 4,000 tons of iron ore when it was intercepted by the U Boat off south of Ireland the previous day. The sea was so rough at the time that one of their life boats was overturned and in a rare show of chivalry, the German commander, Werner Lott, ordered his crew to rescue the Greek sailors.

All 28 seamen from the Diamantis were brought on board the U 35. The Greek crew were offered beds and told to make themselves comfortable.. Some of the men later expressed their keen appreciation of the way in which they had been treated. “When the Greek sailors said good bye to me on the conning tower they went on their knees and kissed my wedding ring as if I was a bishop,” Lott recalled. “I did not want this but they said ‘we owe our lives to you. You have treated us very nicely’.” After dropping off the Greek seamen, the U Boat left Ventry Harbour at a very slow speed. before submerging.

Much to the embarrassment of the Dublin government, the story was reported not only in the local newspapers but also in the international press. It actually made the cover story of Life Magazine on October 16, 1939.From the Taoiseach Eamon de Valera’s standpoint, however, the report was embarrassing because it gave credence to rumours that German U Boats were being succored by the Irish.

When U 35 returned to Germany, Lott was reprimanded by Admiral Karl Donitz, the head of the German Navy, for endangering the life of his crew. But he was still in charge of U 35 on its next tour of duty. On 29 November 29 U 35 was cruising on the surface in the North Sea, east of the Shetland Islands when she was spotted by the British destroyer HMS Icarus. Blinded by the rising sun, the crew of U 35 failed to see the Icarus approaching until it was too late. The submarine managed to submerge but was hit and badly damaged in the ensuing depth charge attack. The Icarus was joined by other destroyers under the direction of the Captain of HMS Kelly, Lord Louis Mountbatten. Realising that their vessel was doomed, Lott ordered the boat to surface. As U 35 flooded, the crew took to the water - all 43 of whom survived the ordeal.

Normally the British would not wait to rescue German sailors, because the British ships would be sitting targets for any other U boats in the vicinity, but on this occasion Mountbatten ordered that all of the German sailors be rescued. Lott sought him out when they reached England. “I thanked him for the extraordinary efforts his destroyer made to pick us up,” Lott recalled. “That is how life is,” Mountbatten replied. “You were extraordinary picking up the Greeks.”. After the conflict Lott made friends with Mountbatten and they corresponded with one another until Mountbatten was murdered by the Provisional IRA in bomb blast on his boat off Mullaghmore, Co Sligo, in 1979.


This post is based on an article by Ryle Dwyer in teh Irish Examiner, U-Boat net and the U35 website. See links below:

It's 30 years this summer. How time flies

What a brilliant story and how wonderful that Lott's gallantry was returned to him.

t is a wonderful story Moannie. Sadly this sort of gallantry was not to last

What an absolutely fabulous story! And one I had never heard! Thank you so much! You told this extremely well...and you certainly deserve David' commendation! Bravo!

Thanks. I'm glad you found it interesting