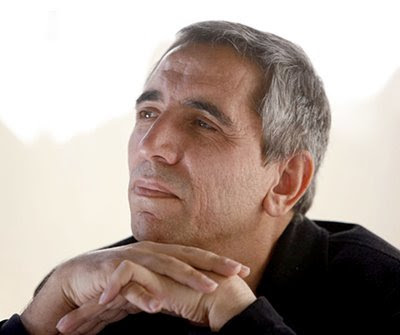 "he has security agents, secret police with him all the time. He has to be careful what he says." He said in an interview with the Independent "The regime, arguably, is losing ground, not the protests, Ordinary Iranians are openly rejecting the legitimacy and power of Ayatollah Khamanei. That is entirely new, unheard of."

Mr Makhmalbaf is touring Europe to try to explain events in Iran to the media. He denied that he had been formally appointed as a spokesman for Mr Mousavi outside Iran. "I am simply speaking on behalf of all the people who are protesting and dying on the streets of Iran," he said. He explained that Mr Mousasvi's means of communication had been cut off, or confiscated, just after the disputed election, Mr Makhmalbaf had been asked informally to make sure that a true picture of what was happening in Iran reached the outside world.

Mr Mousavi had urged his supporters not to confront the regime directly but to "adopt the tactics of Gandhi, the tactics of non-violent protest and civil disobedience". "The problem is that the more people that are killed, the more angry people will be, the more protesters will want to come out onto the streets." Mr Makhmalbaf said

The film director dismissed all hope of some form of negotiated agreement. "Within the last ten days, there has been a meeting between Mousavi and Ayatollah Khamanei," he said. "Nothing came of this meeting. I do not know of any further dialogue which is now going on."

If Mousavi was to become president, he said, Iran would invest in "improving the economy for ordinary people, not creating nuclear weapons or supporting conflicts abroad". Secondly, he said, there would be an end to the "constant harassment of young people which means that virtually every young person in Iran has been beaten up by the security forces."

Mr Makhmalbaf, said that there were reports from Iran that some of the militia deployed to suppress protest were "speaking Arabic". "That is unconfirmed but it suggests that the regime is unable to trust its own security forces to repress the Iranian people," he said. "It suggests that people are being used from abroad”

Nothing more to add to this. Mousavi was never going to lead the people of Iran dancing into the Elysian fields but his presidency would surely have been a little better than what is being offered to the people by Khamenei. I won't say Ahmadinejad, That sock puppet seems to be locked away in a drawer.
Posted by jams o donnell at 8:15 pm

I can't help feeling that it suits some secret western purpose to have chaos there for a while, jams. The Us could unseat Armad-thingie in an instant if it wanted to.

Not really, Welshcakes. I saw it form the other angle, the Russian and there's a lot at stake in Tehran.

An Ahmadinejad victory would be ideal for some. It means that the bogeyman is still in "power"

Iran is too big to take on. it would make Iraq look like a day out to the seaside

Well,Iranian notice any kind of meddling when it is unveiled by media and when it is not aligned to their interest at that time.Russians are the big juice for them now,both the gvernment and the mob but they never trust the Brits,it has rooted in their culture and their mentality, passing from one generation to another and the same kind of a deal is about to be a permanent one with americans.Thats how I have understood them

That's true Dan, Britain is the defaul Satan figure-- and with some historical justification.